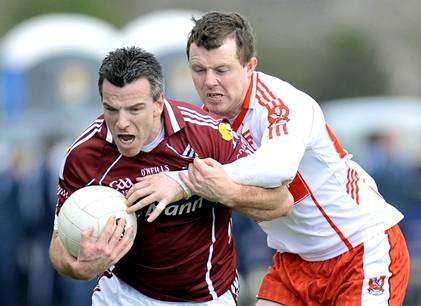 Padraig Joyce and Derry's Barry McGoldrick in league action
Padraic Joyce has returned to full training with Galway ahead of Sunday's Allianz Football League meeting with Westmeath in Mullingar.

The news is a huge boost to the Tribesmen and their new manager Alan Mulholland who believes the veteran forward has a vital role to play in helping the younger members of his panel find their feet at senior inter-county level. Now 34 and the only remaining link with Galway's 1998 All-Ireland winning team, Joyce isn't expected to feature against the Lake County, but could return against their neighbours Meath the following Sunday.