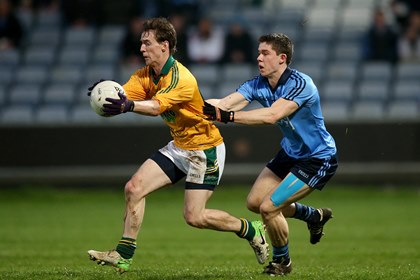 Meath's Bryan McMahon and David Byrne of Dublin
©INPHO/James Crombie
Dublin's composure served them well as they defeated Meath by 0-15 to 0-10 at O'Moore Park.

The winners showed more economy in front of the posts to lead by 0-7 to 0-3 at the break. The gap could have been greater had not Conor McHugh's injury-time shot hit the crossbar, while Meath were cursing their luck when Bobby O'Brien's 21st-minute penalty was well saved by Lorcan Molloy.

Meath - who struck eight wides before the interval - started encouragingly: O'Brien tore through the Dublin defence from the throw-in but his shot went wide after ten seconds, as did that of Conor Sheridan moments later. Ratoath clubman O'Brien made no mistake at the second time of asking, however, opening the scoring in the second minute.

But Dublin gradually found their stride: corner forward McHugh punctuated their first attack with a lovely point to level the scores and Cormac Costello then slotted a free after Paul Mannion was fouled. Eric Lownes followed up with an excellent Dubs point from distance, but Costello's next free struck a post: 0-3 to 0-1 after ten minutes.

Mannion and Jack McCaffrey recorded Dublin wides, as did Seamus Mattimoe from a routine Meath free at the start of the second quarter. Royal captain Neil Shortall was also off target as the wayward shooting continued.

Gaeil Colmcille clubman Mattimoe redeemed himself with a superb point at the end of a flowing move but Dublin replied with a facile Costello point in the 20th minute.

O'Brien won a Meath penalty in the 21st minute and he brushed himself down to take the spot-kick himself, only to see Molloy - touted for a senior start in Omagh this weekend - execute a fine save. It was all Meath now and, after a flurry of wides, Bobby O'Brien stuck an excellent point to reduce the arrears to the minimum with four minutes left in the first half, 0-4 to 0-3.

Shane Carthy pointed after taking a quick free and the same player then drilled a 40-metre free between the posts to make it double scores, 0-6 to 0-3. Costello registered another free seconds before the short whistle sounded and Meath had a lucky escape when McHugh's shot rocketed off the crossbar in first-half injury time.

Meath wing back Shane McEntee provided the first point of the second half but Niall Scully replied in kind almost instantly. When McHugh added another Dubs score in the 33rd minute, there were five points between the sides. A brace of Costello frees made it 0-11 to 0-4.

At the other end, a close-range free was struck between the posts by Mattimoe and Joey Wallace followed up with a second Meath point inside 60 seconds: 0-11 to 0-6 after 40 minutes. But substitute Gavin Burke and Carthy replied with a couple of Dublin points to stretch the gap back to seven.

O'Brien and Mattimoe (free) pointed for Meath before Burke replied to leave six between the teams once more with five minutes left. As Meath kept going, O'Brien and Bryan McMahon (free) pointed to reduce the arrears to four points.

McHugh found the range again from a free as the Dubs took the silverware with five points to spare, with Jack McCaffrey lifting silverware after the game.