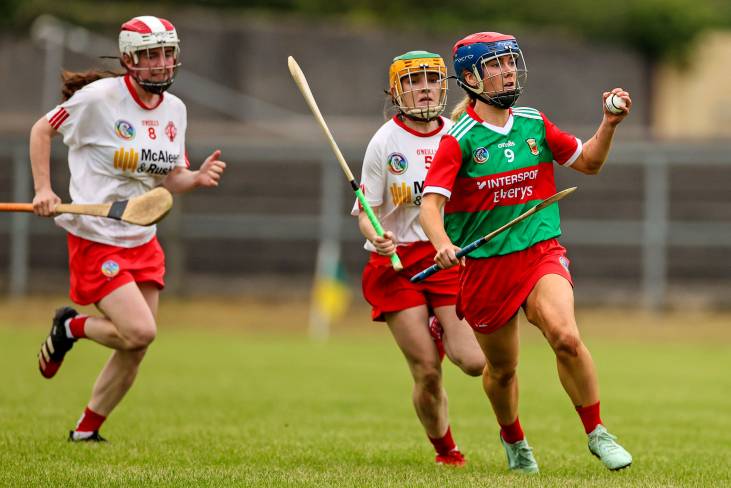 It was a historic day for Mayo camogie, as they marked their first season of adult camogie after a lengthy absence with a 3-8 to 1-12 victory over Tyrone to claim the Nancy Murray Cup at Páirc Seán Mac Diarmada.

The goals were crucial with two of them coming from Ciara Delaney, having been set up by player of the match Áine Charlton. Captain Helen O’Malley also raised a green flag but Tyrone almost pulled off a spectacular comeback, getting to within one of the westerners having trailed by 11 but they just could not get over the line.

Mayo led by 2-6 to 0-4 at half-time thanks to Delaney and O’Malley’s majors, the latter part of a run of 1-5 without reply as Tyrone failed to score in the second quarter. When Delaney finished after another strong run by Charlton 15 seconds after the restart, it seemed like curtains.

But with Reagan Fay in inspired form and bringing her tally to eight points, the Red Hand women rallied. Niamh McNulty’s goal after an excellent catch was a real boost but when it seemed like momentum was in their favour, Mayo dug deep and Orla Hession pointed to leave Tyrone needing a goal that they couldn’t get.

Meanwhile, champions Armagh, who beat Clare in their semi-final by 2-13 to 1-6 on Saturday, will play Wexford in the All-Ireland premier junior final at Croke Park on September 12, as a result of the Yellowbellies’ 3-18 to 0-8 victory over Roscommon.

Rosommon actually started well and had two early chances but two wides resulted and once Wexford got to grips with the excellent opposition sweeper, Rachel Fitzmaurice by playing the wings, they began to make hay.

Megan Cullen got an eighth minute goal and it was 1-2 to 0-0 at the water break. On the resumption, all the Wexford inside forwards, Emma Tompkins, Emma Codd and Lisa Firman registered points and when Ailis Neville goaled that made it 2-7 to 0-1 at half-time, the Roscommon point coming from a long-distance free by Shauna Fallon just before the short whistle.

The Connacht side were awarded a penalty early in the second half but Fallon’s shot was too central and Lara O’Shea was able to make the stop. With that, any hope of a spectacular comeback dissipated.

When Roscommon removed Fitzmaurice from her sweeping role as they needed to chase the game, it opened space and Wexford profited. Chloe Cashe, who had been kept to a point in the first half, got a goal at the end of an excellent move on 41 minutes and finished with 1-8.

Fitzmaurice and Niamh Watson tried hard for Roscommon but it was all about Wexford, Clodagh Jackman, Aideen Brennan, Cashe, Neville and Cullen among those to shine.

Elsewhere, the talented Áine Magill completed a 24 hours she won’t forget in a hurry when following up a star outing for Antrim in their All-Ireland intermediate semi-final win over Galway by scoring 1-3 from midfield as the Saffrons’ minors as they came out on top of a thriller against Laois by 3-19 to 3-12 to reach the Tesco All-Ireland B final, where they will face Offaly, who defeated Derry by 4-12 to 1-8.