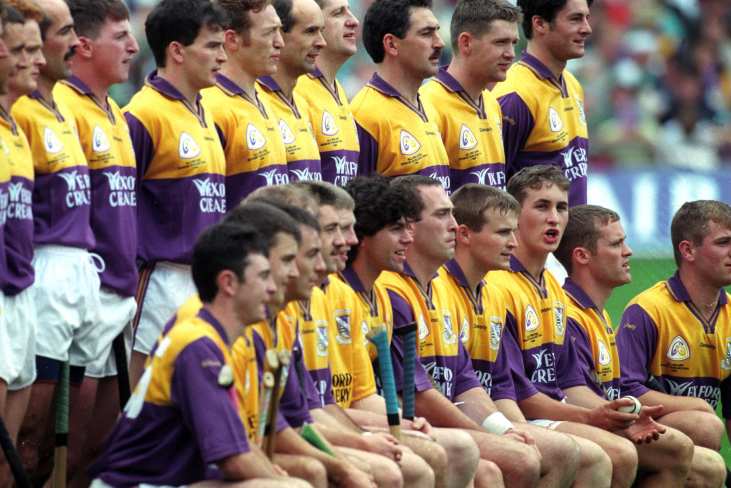 Although the ongoing covid restrictions mean that the Wexford hurlers of 1996 will not be honoured in the traditional fashion tomorrow as this year’s jubilee team, team captain Martin Storey will fly the county flag when he brings the Liam MacCarthy Cup to the plinth on the pitch before the All-Ireland hurling final.

The county’s 1996 All-Ireland win over Limerick was one of the stand out triumphs of the modern era. It was the county’s first All-Ireland title for 28-years, won by a group of players with serious character and hurling ability, and masterminded by a brilliant manager in Liam Griffin.

After beating Kilkenny and Dublin in Leinster, they advanced to the provincial final against an Offaly side which had beaten Wexford in the previous two seasons, and which had contested All-Ireland finals in 1994 and 1995.

Offaly were hot favourites but Wexford produced a stunning performance to secure a first Leinster title in 19 years. Victory against Galway in the All-Ireland semi-final secured Wexford’s passage through to a first All-Ireland final since 1977, when they lost to Cork. That was Wexford’s third final defeat of the decade, having also gone down to Cork in the 1970 and 1976 deciders.

Wexford went into that 1996 final as outsiders against a Limerick side which had won a brilliant Munster championship when defeating Cork, Clare and Tipperary after a replay, but Wexford defied the odds – which was all the more remarkable considering they played the second half with just 14 men – to win by 1-13 to 0-14, with the goal coming from Tom Dempsey in the first half.

The GAA proposes to honour both of the winning teams of 1995 (Clare and Dublin) and 1996 (Wexford and Meath) at a future date.