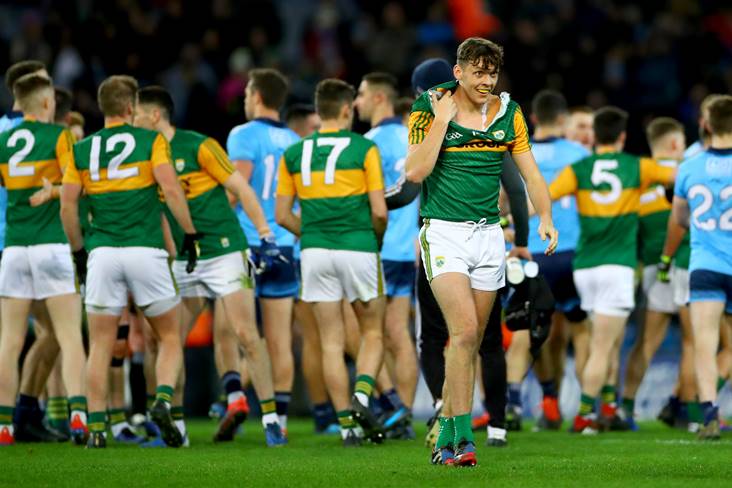 Kerry's David Clifford with a torn jersey after the Allianz FL Division 1 clash with Dublin at Croke Park. ©INPHO/James Crombie.

“It's been a bit of a whirlwind to be honest. The lads are only back two weeks so we haven't had much time on the practice ground, but that'll come over the course of the next couple of weeks.”

Dessie Farrell’s Dublin and arch rivals Kerry served up a cracker in Croker on Saturday evening.

“It's always a tough game to have to come to Dublin. We're happy enough. They showed great resilience and great determination to go and be brave and go after it. We are relatively happy.”

A late David Clifford free earned Peter Keane and the Kingdom a share of the spoils.

“Should we have let James Durcan in so close to our goal for that shot? Would the likes of Dublin or Kerry have done things differently and taken a card of some colour, any colour, red, yellow, black, there to stop James getting his shot away?”

Declan Bonner’s Donegal were denied at the death by Mayo in Ballybofey.

“I’d love to get that trophy at the end of it. Obviously there are phases of what you want: you obviously want to stay in the division, that’s the first thing you want to do, but ultimately, if you don’t have that belief that want to go for the title then you wonder why you’re there.”

After his team enjoyed a winning start against Meath, Tyrone boss Mickey Harte outlined his targets for their league campaign.

“It was a bit frustrating in that we did a lot of good things in the first half and we did not avail of the opportunities that we created. And when you are playing a better class of team these things come back to haunt you. And it did today.”

Andy McEntee watched his Royal County team spurn a couple of good goal scoring opportunities in the first half at Healy Park.

“We are not short of character or fight and battle and they are only about 60 per cent fit at this stage, but they showed great heart and passion for the cause and I’m really pleased with that.”

“I think there is plenty left in this team and we have some decent talent coming through.”

Despite their defeat, Farney County manager Seamus McEnaney is confident about the year ahead.

“We owe the good people of Cavan who paid good money to come and see us an apology. This was nowhere near good enough.”

Cavan’s performance against Armagh on Saturday evening fell a long way short of the standards that Mickey Graham has set.

“A tough game. Fermanagh came down and they were very well set-up defensively, and our boys, at times, found it hard to break down. We kept at it. Second-half I thought we upped the ante a bit, work-rate-wise. Just glad to get out with a result, there's no easy game. Hopefully it gets us a bit of momentum.”

“You probably need 10 points to get out of the division. If you lose your first game, then you need to win five of your remaining six match to guarantee yourself promotion. We have come out of a difficult game, we controlled it well in the end and we have our two points.”

It was very much a case of mission accomplished as far as Ronan McCarthy was concerned following Cork’s seven-point success over Offaly at Pairc Ui Chaoimh.

“We could have won it and lost it but I am extremely proud of the players. They put in a huge shift after a bad start again.”

David Power and Tipperary have a point on the board following their draw with Down.

"There's nothing that beats county football, and I suppose I didn't really appreciate that until today.”

34-year-old Paddy Cunningham is delighted to be back wearing the Antrim jersey.