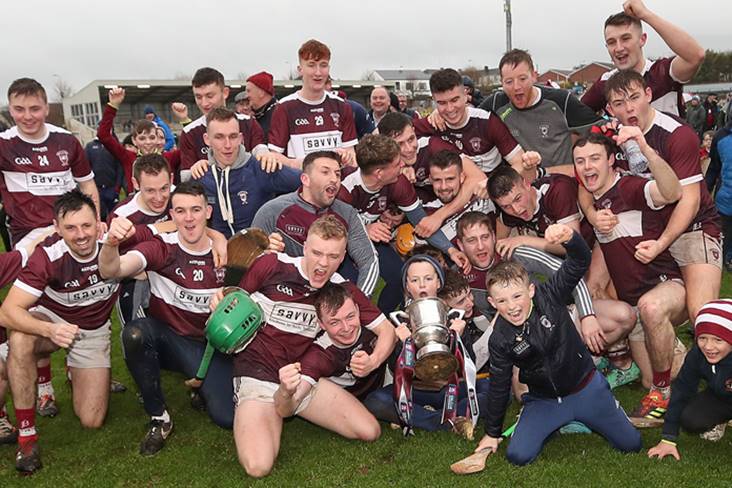 “It’s not about the managers, it’s about the players. You can talk about the Johnny Kellys and the Davy Fitzgeralds and all the people you like on the sideline. But, unless you have men of that quality and prepared to do that, you can do very little.”

Brendan Maher’s heroic performance was singled out by Borris-Ileigh manager Johnny Kelly in his post-match interview.

“I’ll tell you, I’ll give up one Christmas for an All-Ireland semi-final. It will affect it but maybe we’ll have our Christmas over the next two weeks.”

Experienced defender Paddy Stapleton and his club-mates will be taking it easy over the festive period.

“Myself and Dan (McCormack) are going to have sacrifice the Tipp team holiday I think, but we'll gladly do that. This is enough of a holiday for us.”

“Even out there today at 40 years of age, he’s hitting frees, scoring from play, leading the way, directing traffic, everything. He’s just an incredible man for this club.”

Garrycastle manager John Keane took his hat off to the retiring Dessie Dolan.

“We lost 'Digger' last week and nothing is going to be the same again. We're looking at everything differently. You just don't know, in life and in sport, what's going to happen next. Dermot was an unbelievable human. He played with this team, was on championship-winning teams with this club. He was one of the best humans I ever met and if we had a few more like him, the world would be a better place.”

“Our starts over the last couple of games have been quite slow – but we got a phenomenal start today.”

“Eire Og is a family. We pride ourselves on keeping connected and staying in touch with each other. It is great that Eire Og is relevant again in Leinster.”

The Carlow champions have five Leinster titles to their credit and Joe Murphy is hoping they can pick up number six at the expense of the Dublin standard-bearers.

“No complaints, the better team won. We had too many sloppy turnovers, simple as that. In fairness the are a good side.”

“A lot of these lads have seven or eight Connacht medals. They’re a credit to themselves. I look forward to the next six weeks working with them. In the past, we’ve taken some time off. But with six weeks, we’ll have to rethink that. Six weeks is not that long away.”

The new club championship fixtures schedule has given Corofin manager Kevin O’Brien some food for thought ahead of their semi-final clash with the winners of Nemo Rangers v Clonmel Commercials.

“We were hanging on for a draw there. We won the ball from the throw ball and we just got one break and got the ball to Laura. It is an unbelievable way to win it but a horrible way to lose it. My heart goes out to Kilkerrin/Clonberne.”