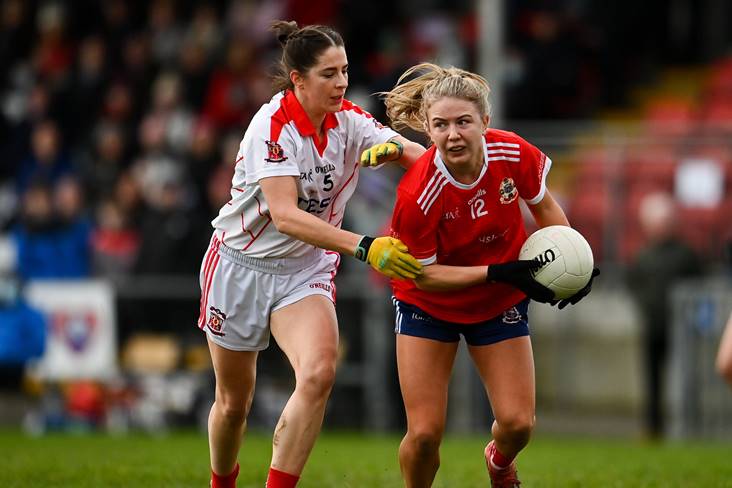 The 2022 currentaccount.ie All-Ireland Ladies club football champions will be crowned over the weekend – with teams from five counties going in search of silverware.

There’s an historic double-header at Croke Park on Saturday, as All-Ireland Ladies Club Football Finals are played there for the very first time, with Longford Slashers taking on Tipperary opponents Mullinahone in the Intermediate Final at 3pm, followed by the Senior Final clash between Monaghan’s five-time winners Donaghmoyne and the current holders, Galway’s Kilkerrin-Clonberne, at 5pm.

On Sunday, attention switches to Kilmallock in Limerick, where Cork outfit Naomh Abán take on Galway’s Salthill-Knocknacarra in the Junior Final at 1pm.

Both of Saturday’s games will be live on TG4: https://www.tg4.ie/en/player/watch-live/, while viewers can access the LGFA’s live-streaming portal https://page.inplayer.com/lgfaseason2023/item.html?id=1940390 to watch Sunday’s Junior Final.

Tickets are on sale for all three games at https://ladiesgaelic.ie/buy-your-tickets-now-for-the-2022-currentaccount-ie-all-ireland-club-finals/

THE honour of becoming the first teams to line out in an All-Ireland Ladies club football Final at Croke Park will fall to Longford Slashers and their opponents from Tipperary, Mullinahone.

Two excellent teams will contest the 2022 currentaccount.ie All-Ireland Intermediate decider at the famous venue – and this is uncharted territory for both.

Longford Slashers will become the very first team from Longford to contest an All-Ireland Ladies club football decider – with Mullinahone making an impressive step-up from the Junior ranks to reach Saturday’s showpiece.

It was just last February when Mullinahone appeared in an All-Ireland Junior decider but unfortunately from their point of view, they came up short against Dublin opponents St Judes.

To recover from that Final heartbreak and go all the way to an Intermediate Final just ten months later speaks volumes for the determination and character that exists within the panel.

Mullinahone will bring a massive hunger to the game but that will be matched by Longford Slashers, an excellent team and no strangers to adversity themselves.

In their Leinster Final against Meath opponents Skryne, Slashers conceded three early goals and looked to be in real trouble.

But Slashers, extremely well-organised and hard-working, set about their task with aplomb and worked their way back into contention.

Deirdre Doherty was the big danger for Charlestown and in superb form once again, kicking all ten points for the Westerners.

But in a keenly-contested tie, Slashers had enough wherewithal to get the job done, earning a 1-11 to 0-10 victory and an historic spot at Croke Park.

Kate Shannon, a real tower of strength, collected 1-2 for Slashers and Barry impressed once again with four points, including three frees.

Mullinahone, meanwhile, were digging out a semi-final victory after extra-time against Fermanagh opponents Derrygonnelly Harps.

This was a thrilling game that saw the Munster champions claim a crucial extra-time goal from Lorraine O’Shea, daughter of team manager, Mary, to eventually help clinch the win.

Mullinahone, hoping to emulate the feats of Brian Borus in 2009 by landing the Intermediate crown, are very much like their opponents – a finely-tuned outfit boasting a lovely blend of youth and experience.

Lorraine O’Shea and sister, Aoibhe, have been in excellent form of late and Kilkenny camogie star Denise Gaule remains as influential as ever within the squad.

It’s all to play for in this currentaccount.ie All-Ireland Intermediate club Final – and the winners will have the honour of being the first team to savour national Ladies Club football glory at Croke Park.

Longford Slashers are unchanged for this one but Mullinahone have two changes to the team that lined out from the start against Derrygonnelly, with Rosa White and Ailish Langton listed to start ahead of Gaule and Michaela Kenneally.

ULTIMATELY, it was a Nicola Ward brace of first half goals that proved the difference between the two sides.

It was back in mid-January when the currentaccount.ie All-Ireland Club Finalists last met in a competitive fixture – in the 2021 All-Ireland semi-final.

At the Clonberne Community pitch, Kilkerrin-Clonberne made home advantage count against Donaghmoyne, running out 2-8 to 0-8 winners.

Ward’s two first half goals helped to open up a 2-3 to 0-3 interval lead – and Kilkerrin-Clonberne would hold that six-point lead until the finish.

But what about Saturday? How will this 2022 decider pan out at Croke Park?

All will be revealed in front of the TG4 cameras and this promises to be a riveting encounter between two teams with plenty of All-Ireland Final experience.

Donaghmoyne are five-time All-Ireland Senior champions and hunting a first title since 2016.

Kilkerrin-Clonberne, meanwhile, are the holders and appearing in a third successive final on Saturday.

Having suffered an agonising one-point defeat in the 2019 Final against Cork’s Mourneabbey at the TUS Gaelic Grounds in Limerick, Kilkerrin-Clonberne exacted sweet revenge last January to claim the coveted Dolores Tyrrell Memorial Cup.

It was a piece of silverware that Kilkerrin-Clonberne desperately craved and now that they have it in their possession, they won’t want to let go.

Going on recent form – as Kilkerrin-Clonberne landed the Galway title against before securing a fifth successive Connacht crown – that victory has had a liberating effect.

They’re playing with freedom and the manner of their All-Ireland semi-final victory over Waterford outfit Ballymacarbry was most clinical.

They were 1-5 to 0-0 clear at half-time and eventually ran out 14-point winners, with Galway star Ailish Morrissey collecting 1-3.

Right through the team, there’s inter-county experience, from the last line of defence, TG4 All Star nominated goalkeeper Lisa Murphy, to Morrissey, who wore the number 15 shirt in the semi-final.

The Wards, the Divillys, the Noones…the names trip off the tongue and this is very much a golden generation for Kilkerrin-Clonberne, who are anxious to capitalise on the talent at their disposal and create a dynasty.

Facing them are Donaghmoyne, a group of players with a never-say-die attitude and, much like their opponents, a very tight bond.

Donaghmoyne captured a 20th Monaghan crown before landing a fourth Ulster title on the trot (14th in total) – and perhaps one of their most satisfying after playing much of the game with 14 players.

St Ergnat’s, Moneyglass, were potentially dangerous opponents but Donaghmoyne managed this fixture well and followed up with an impressive dismantling of Dublin and Leinster champions Kilmacud Crokes in the All-Ireland semi-final, and on home soil.

Donaghmoyne, too, have players past and present who have worn the Monaghan county shirt with distinction. The four Courtney sisters in the starting line-up provide energy and drive, as do the precociously-talented Garland twins, Amy and Lauren.

In the forward line, Cathriona McConnell grabbed gossip and scoring headlines for her exploits last time out – playing on the day after she was married.

Donaghmoyne may feel there’s another fairytale story about to unfold for them at Croke Park– but they’ll have to overcome a side who had their number just ten months ago to win a sixth crown.

Both teams are unchanged from their respective semi-final victories.

After a tough encounter against London opponents Parnells in Portarlington, the silverware went to Naomh Abán, with Lisa McSweeney, Anita Thompson and Ailbhe Lynch scoring the goals in a 3-6 to 1-7 win.

Siobhan Ní Bhuachalla was captain of Naomh Abán on that occasion and now, 19 years on, could Una Twohig follow in her footsteps and accept national silverware on behalf of the club?

Salthill-Knocknacarra will fly the flag for Galway and Connacht, in what will be a first All-Ireland Ladies Football Final appearance for the club.

Caltra Cuans (2010) are the only previous club from Galway to win this competition but Salthill-Knocknacarra will make the trip to Kilmallock with confidence.

In a low-scoring and tight Munster Final, Naomh Abán did enough against Limerick opponents Oola to secure the silverware.

Defensively strong, Naomh Abán mined seven points at the other end of the pitch to land a two-point victory.

That win put Naomh Abán on a collision course with Monaghan’s Castleblayney Faughs in the All-Ireland semi-final – and it was a hurdle that Naomh Abán jumped.

Again, enough points on the board proved sufficient, as Naomh Abán claimed a 0-12 to 0-7 win, with Alannah Hoare and Grace Murphy contributing half of that tally between them.

On the other side of the draw, Kate Thompson stepped up to the mark with a winning late score as Salthill-Knocknacarra edged past O’Dwyers from Dublin on home soil at The Prairie.

In their Connacht Final victory over Drumcliffe Rosses point, Lauren O’Donnell and Laura Kelly combined for 1-12 and they were to the fore again this time.

These are two players that Naomh Abán will need to keep a close eye on but a number of Salthill-Knocknacarra chances went begging against O’Dwyers, admittedly in difficult conditions, and this is an area they’ll be hoping to address.

Fans of both Naomh Abán and Salthill-Knockncarra will travel in their droves– and hoping to put on a show befitting of the occasion.

Both teams are unchanged for this one.