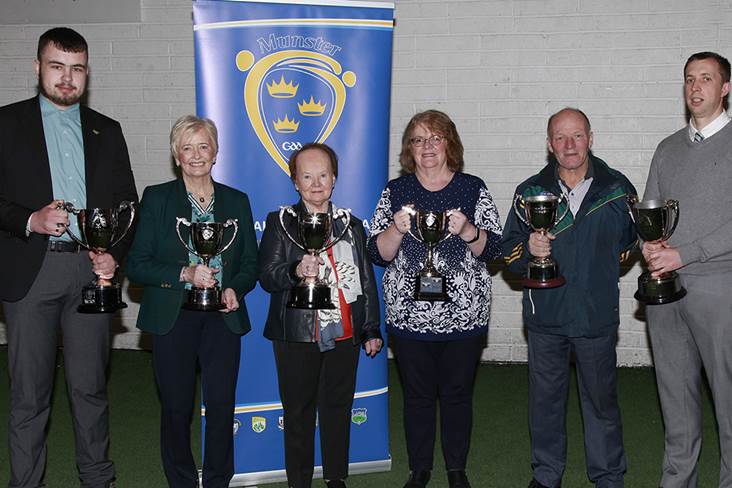 Gearóid Ó Riain, Cathaoirleach Comhairle na Mumhan and Colm Ó hAodha, Cathaoirleach Iar Bhunscoileanna na Mumhan were present at the launch along with friends and families of those whose names were being perpetuated on the new cups (see details below).

Liam Kennedy was educated in Nenagh CBS and UCC Cork and played hurling and football with his native Kilruane MacDonaghs. Liam took up a teaching post in Ard Scoil Ris, Limerick in 1978 and was instrumental in promoting hurling in the school from the outset and his work came to fruition when the school won the 2008 Dean Ryan Cup followed by successes in the Harty Cup and White Cup. Liam was heavily involved with Na Piarsaigh GAA Club in Limerick City and was Club Treasurer at the time of his untimely passing. Known affectionately as the Grandfather of Hurling in Ard Scoil Ris, he played a crucial role in sowing the seeds for the Croke Cup success by the Limerick City school earlier this year.

Gerry Bennis came from a well-known hurling family in Patrickswell and gave great service to his club as a player and administrator. Gerry was also involved with Limerick GAA in many roles, serving as Limerick County Board Chairman in the 1990s. Gerry was heavily involved in the rejuvenation of the colleges competition in Limerick and held the position of Post Primary Schools Servicing Officer in Limerick for many years. His dedication in this role was exceptional which benefitted many young players at Club, Primary School and Post Primary Schools levels.

A native of Duagh, Co. Kerry, John Stack enriched the lives of all those who came under his care in St Joseph's Secondary School Tulla Co. Clare. His dedication to his family, his role as a teacher of Mathematics and Religion, his charitable work for those less well-off and his promotion of school hurling were hallmarks of a remarkable life.

Mícheál Forrestal started teaching in Clonmel High School in 1966 and from the outset, got involved with Coláistí na Mumhan. Mícheál served as both Secretary and Treasurer of the Munster Colleges body over many years, working very hard to ensure every competition was organised in a fair and diligent manner. Mícheál worked very closely with the late Denis Noonan and Tom Collum during this time to ensure the smooth running of Munster Colleges. Mícheál was also instrumental in promoting Gaelic Games in Clonmel High School, helping them to Munster successes in the Corn an Uachtarain, Corn na gColáistí and Corn na Banndan.

The Trophy is named after Colm Kirwan, Deputy Principal of Castleisland Community College from 2003 to 2013. Colm was a committed GAA lover with a great passion for the promotion of Gaelic Games in schools. Colm served as a coach and administrator in Leinster where he was Secretary of Wicklow VEC and was involved in Avondale Community College and Wicklow Vocational Schools teams. Colm made the move back to his native Castleisland in 2003 where he continued to serve on Munster and Kerry VEC committees and was key advocate for schools GAA in Castleisland Community College, Kerry and Munster. Colm was a dedicated Castleisland Desmonds club member where he served a secretary up until his passing. Colm’s love for the GAA and especially schools sport will leave a long legacy in Castleisland, Kerry and Munster.

Sean Aherne started teaching in Kilmacthomas in 1974 and immediately set to work in organising Gaelic games. The school won its first Munster title in 1979. Sean continued to organise and promote GAA as a teacher and then Principal for over 30 years in what became St. Declan’s Community College. A golden era of success was achieved with over 10 further Munster titles including a Munster Senior Double in 2000 and many Waterford titles won. The ongoing strength of Gaelic Games in St Declan’s is the legacy of Sean’s inspirational work. Sean was deeply ingrained with his native Stradbally, winning 3 County Senior Football titles and a Junior Hurling County title as well as representing Waterford Senior Footballers. Sean was manager of Stradbally in later years, helping them to win 7 County Senior titles, including 5 in a row from 2001 to 2005. Sean's contribution to GAA in Club & School in Waterford is fondly remembered by all who came in contact with him, and he left a rich legacy for future generations.