New book looks at the fascinating story of Semple Stadium 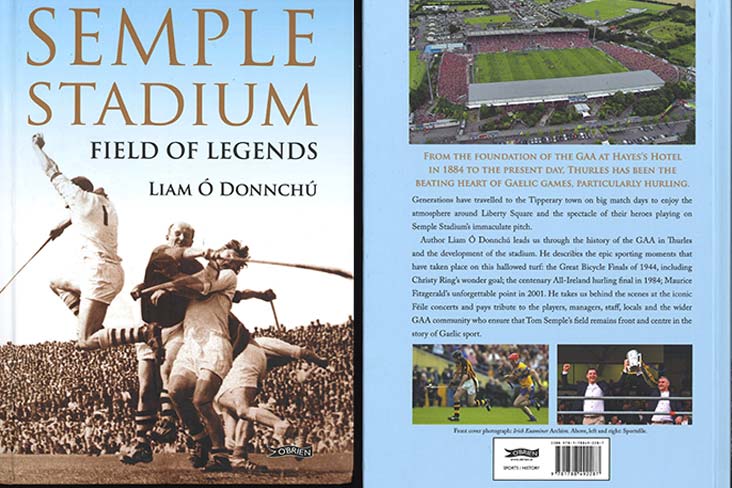 'The favoured ground for generations of hurlers; here, the sliotar bounces true, the crowds are close to the clashing ash, and reputations are created or shattered'

From the foundation of the GAA at Hayes's Hotel in 1884 to the present day, Thurles has been the beating heart of Gaelic games, particularly hurling. Generations have travelled to the Tipperary town on big match days to enjoy the atmosphere around Liberty Square and the spectacle of their heroes playing on Semple Stadium's immaculate pitch.

Author Liam Ó Donnchú leads us through the history of the GAA in Thurles and the development of the stadium. He describes the epic sporting moments that have taken place on this hallowed turf: the Great Bicycle Finals of 1944, including Christy Ring's wonder goal; the Centenary All-Ireland hurling final in 1984; Maurice Fitzgerald's unforgettable point in 2001. He takes us behind the scenes at the iconic Feile concerts. He pays tribute to the players, managers, staff, locals and the wider GAA community who ensure that Tom Semple's field remains front and centre in the story of Gaelic sport.

'Semple Stadium holds a fascination for so many people. Even on weekdays, when no game is on, I have occasionally met people who happened to be in Thurles and wouldn't pass without going in. They stand and gaze in silence at the vacant arena, but for them it's not empty. They are recalling the days their parents or neighbours first brought them here, the halcyon days of  the  epic battles, the  legendary players ...  For them, the stadium has preserved their youth and vigour, and they have not grown old.'

Semple Stadium - Field of Legends, by Liam Ó Donnchú is published by The O'Brien Press and out now.