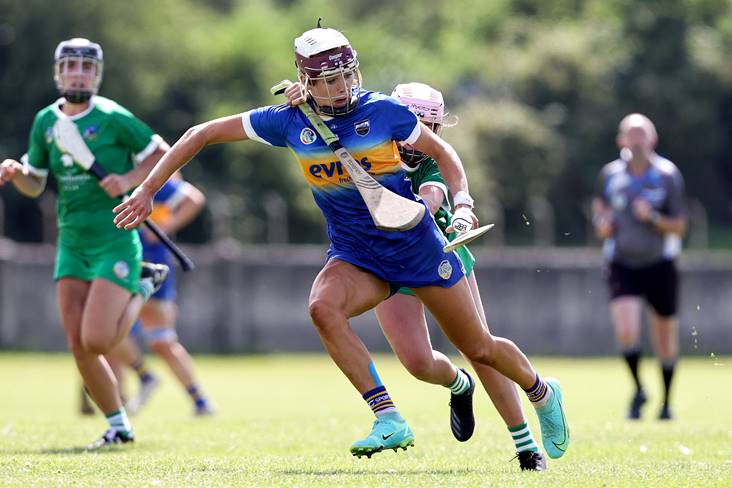 Tipperary survived a brief Limerick rally to post a comfortable and merited 2-20 to 1-11 victory over Limerick at the Éire Óg grounds in Nenagh and ensure a place in at least the quarter-finals of the All-Ireland Senior Camogie Championship for a team that has reached the last four semi-finals.

They will be joined in the knockout stages from Group 1 by Wexford, who recorded a 4-10 to 0-15 triumph over Offaly yesterday, with the remaining rubber between the sides determining who will finish top and have a chance of going directly to the last four.

Galway have a superior scoring advantage to Kilkenny so a draw will be enough for them to bag the No 1 seeding. Cork and Tipperary hold the whip hand in that regard in the other groups.

The Premier County were clashing with Limerick for the first time in the championship since the 2019 quarter-final, which they won, and they are a superior outfit now, a contention that was confirmed with a largely professional performance again today.

This 12-point success follows a 17-point victory over Offaly and were it not for the heroics of Limerick goalie Laura O’Neill, who made three excellent saves, the margin would have been greater against the Shannonsiders.

Costelloe hit a couple of points for Limerick but Tipperary shot the last seven points of the half– four from Devane, two from Orla O’Dwyer and one for Ereena Fryday to leave it 0-12 to 0-3 at half-time.

Devane blasted a penalty beyond O’Neill after a foul on O’Dwyer in the 34th minute and before long, the blue and gold had a 15-point advantage.

Pat Ryan saw his charges show some spirit, as they fired 1-5 without reply, Costelloe splitting the post four times and Sophie O’Callaghan grabbing a goal, reducing the deficit to seven.

Tipp took the wind out of the threatened fightback, Devane converting two steadying frees including one from a prodigious distance. Karin Blair raised another white flag before Mairéad Campion shook the net at the death.

A Miriam Walsh goal finally broke the stern resistance of Westmeath as Kilkenny ground out a 2-17 to 1-11 victory. A Hannah Core goal had helped the visitors lead at the break by 1-8 to 0-7 but Walsh’s goal was a turning point and Katie Nolan added a major to seal the deal for the Stripeywomen.

A fortuitous goal from long range by Niamh Kilkenny followed by a tap-in for Siobhán McGrath opened an insurmountable gap for Galway over Clare in the third quarter. Late goals by Chloe Morey and Áine O’Loughlin brought Ger O’Connell’s charges to within three points of the Tribeswomen but the experienced trio of Aoife Donohue, Ailish O’Reilly and Kilkenny pointed to confirm a 2-12 to 2-6 verdict.

Goals from Joanne Dillon, after a fantastic run and skilful assist by Orla Sinnott, Anais Curran, Lisa Bolger (penalty) and Mag Byrne were the fuel for a resurgent Wexford, who got the better of an honest Offaly by 4-10 to 0-15.

Down followed up their desperately unlucky loss to Waterford last week with an even better performance, as they got within six points of Cork, 1-13 to 0-10.

The Rebels laid the groundwork for the result in the first half, Fiona Keating’s goal five minutes before the break the key score. Sorcha McCartan, who has been training with Leeside giants St Finbarr’s as she is based in Cork city due to work, registered two points for Down in that period, while Niamh Mallon, who finished the game’s top scorer with seven points (three from play) was also on the mark.

Cork could afford to be wasteful with their shooting in the second half and still prevail, Hannah Looney once again putting in a huge shift at midfield.

Waterford exacted sweet revenge on Dublin, who relegated them to Division 2 of the National League, with a resounding 2-17 to 0-9 win at Skerries Harps. The hosts began well with points from Jody Couch, Aisling Maher and Kerrie Finnegan but they were well off the pace for the remainder of proceedings against a buoyant Déise unit.

Beth Carton kept the scoreboard ticking over and goals from Niamh Rockett and Abby Flynn, after outstanding vision by Carton, opened a nine-point margin and with Dublin only managing two points after the change of ends, it was a cruise to the end for Derek Lyons’ outfit.