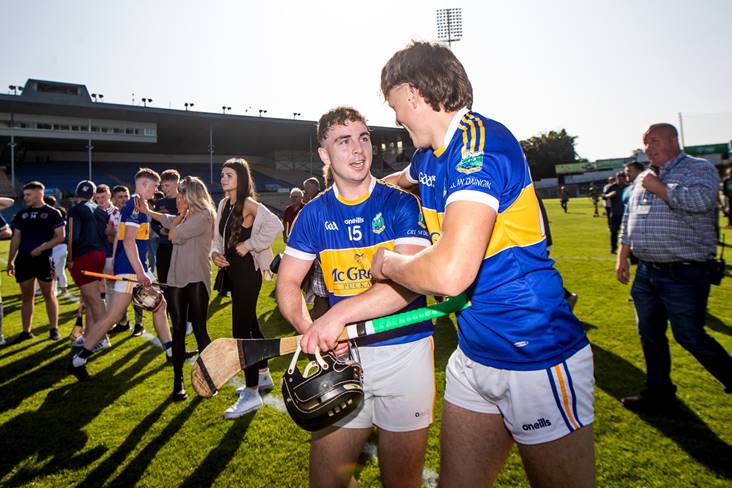 Kiladangan are Tipperary SHC champions for the first time as they edged Loughmore-Castleiney in the most dramatic circumstances imaginable after extra-time at Semple Stadium this afternoon.

County star John McGrath, scorer of 1-10, looked to have won the Dan Breen Cup for Loughmore with a '65 point in the 81st minute but Kiladangan went straight down the field and grabbed a goal with almost the last puck of the game through Bryan McLoughney to snatch victory from the jaws of defeat. Corner-forward McLoughney was taken off in normal time and later brought back on in extra-time when he pounced for the match-winner.

A sensational Noel McGrath point had forced a thrilling contest into extra-time as the scoreboard read, Kiladangan 0-23 Loughmore-Castleiney 3-14, at the end of the regulation 60 minutes.

Kiladangan’s Joe Gallagher and Billy Seymour at the end of extra-time. ©INPHO/James Crombie.

Loughmore's three goals all arrived in the opening 20 minutes, courtesy of Evan Sweeney, Tomas McGrath and John McGrath and they had finished the first-half 0-12 to 3-5 in front.