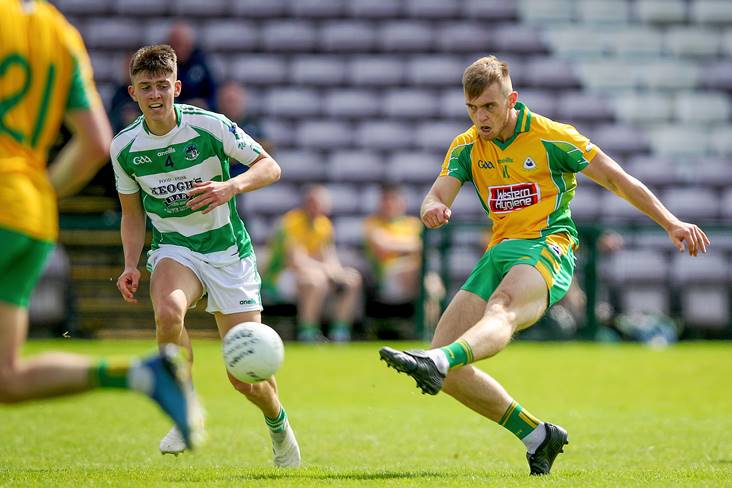 Corofin began their bid for an eight successive Galway SFC title in emphatic style at Salthill this afternoon as they swept aside Oughterard's challenge with a second half goal blitz.

Pearse Stadium was the setting for the battle of the All-Ireland senior and intermediate champions in Group 4A, as Kevin O'Brien's charges underlined their sheer class by thrashing the newly promoted side 7-17 to 0-11 in the end. Oughterard were unlucky to be trailing 2-8 to 0-7 at half time having missed some excellent chances. Dylan Wall and Michael Farragher both netted for Corofin before the floodgates opened on the restart. Further goals followed from Micheal Lundy, Darragh Silke, Jason Leonard, Dylan Canney and Matthew Cooley. Silke was impressive for the winners and finished with 1-7. The all-conquering senior champions even had the luxury of bringing All-Star forward Ian Burke off the bench in the closing stages. In the later throw in, Anthony Finnerty's Salthill-Knocknacarra signalled their intentions with a deserved 3-13 to 0-10 victory over St Michael's. At Tuam Stadium, it was Eoin Finnerty's goal on the stroke of half time that proved the decisive score in Mountbellew-Moylough's 1-7 to 0-8 win against Annaghdown.

Yesterday, a Dessie Conneely inspired Moycullen made easy work of Micheal Breathnach (3-12 to 1-6), Caherlistrane pulled off a 1-9 to 1-7 surprise win on last year's finalists Tuam Stars, Milltown narrowly overcame An Cheathru Rua by 0-10 to 1-6 and Barna defeated neighbours An Spideal 2-7 to 0-10.