All Star Football Nominations: 13 is lucky for the Dubs 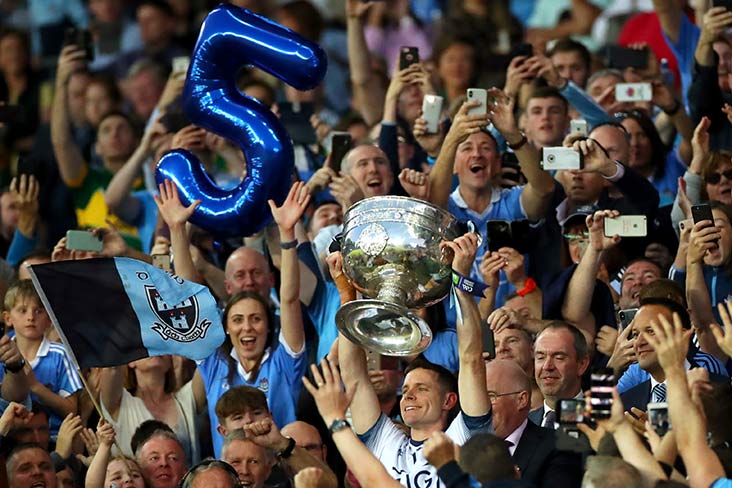 Five in a row history makers Dublin have been rewarded with a baker’s dozen in this year’s list of nominees for the PwC All-Star football awards.

And to top it off, the All-Ireland champions have made it a clean sweep of nominees for the GAA GPA footballer of the year award for the second season in a row, with Stephen Cluxton, Jack McCaffrey and Con O’Callaghan to be voted on by their fellow peers before an announcement is made live on PwC All-Star night on Friday, November 1.

Dublin are the dominant presence with 13 players in the 45 strong list of nominees who come from across 11 different counties and represent the cream of the crop from the inter-county football season of 2019.

Munster champions, and beaten All-Ireland finalists Kerry have nine players down for the final consideration, with Ulster champions Donegal the next highest representation with six.

The number of exciting games and impressive performances in the 2019 football season is reflected in the breadth of the counties represented, with the full breakdown being Dublin 13, Kerry 9, Donegal 6, Mayo 4, Tyrone 3, Meath 3, Armagh 2, Roscommon 2, Cavan, Clare, and Cork 1 each.

As well as voting on the overall Player of the Year accolade, intercounty players will also be asked to vote on who they believe is the Young Footballer of the Year. The 2019 shortlist for this prize sees Armagh’s Rían Ó Neill alongside Kerry’s David Clifford and Seán Ó Shea.

Congratulating the list of nominees, Uachtarán CLG John Horan said: “To be chosen as one of the stand out performers in what was a special Gaelic football season is a major honour and I congratulate all of those who have made this distinguished shortlist.

“I am delighted to see so many counties deservedly represented and while it is a significant individual achievement, it is also a source of immense pride shared by the families and clubs to which all of these star players belong. My thanks to PwC for their support and commitment to the institution that is the GAA GPA All-Stars scheme.”

Paul Flynn, Chief Executive of the GPA said: “Congratulations to all of the footballers who have been nominated for PwC All-Star Awards for 2019. It’s been another fantastic year on the pitch for all of the nominees. I know from personal experience what a huge honour it is to receive an All-Star and it’s important we recognise the talent that these players have and worked hard for.”

The PwC All-Stars are chosen by a committee made up of members of the national broadcast, print and digital media. The final selection of 15 players will be made late next month and all players will be honoured at a gala black tie banquet at Dublin’s Convention Centre on Friday, November 1 – an event which will be shown live on RTÉ TV.