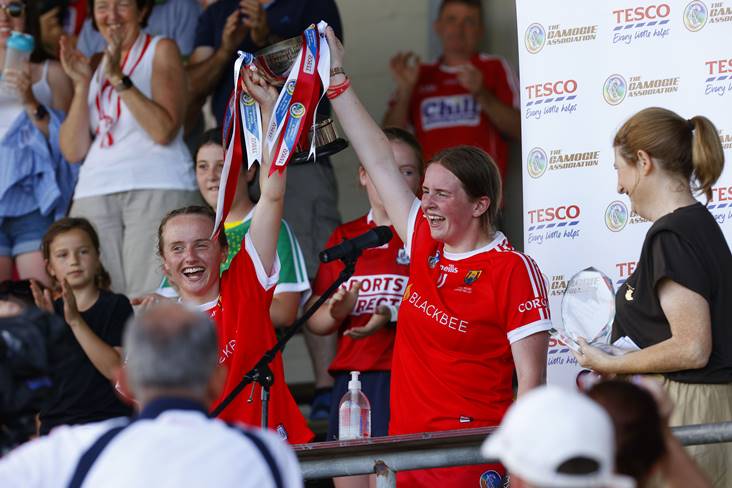 Cork survived a late scare to grab a record 14th Tesco All-Ireland U16A Camogie title, defeating Kilkenny in a pulsating affair by 2-12 to 2-10 at St Brendan’s Park in Birr.

After going 16 years from 2013 with a crown at this level, the Rebels have now secured their second in three seasons, as reward for redoubled efforts at underage level in the Rebel County.

Kilkenny began best with points from Lauren Ronan and Rachel Dowling but Gráinne Finn and Caoimhe Sheehan brought Cork level. The Leesiders had moved two ahead when Rose Kelly goaled in the 27th minute.

There is no doubt that the next puckout was the most significant of the game as Cork hit with an identical score a minute later from Fiona Twohig and that gave her side a lead they would never relinquish.

It was 1-8 to 1-6 at the interval and points from Finn and Sinéád Hurley quickly doubled the margin. Kilkenny kept plugging away but Emily O’Donoghue’s goal at the three-quarter mark gave the Reds some vital breathing space.

An O’Donoghue point put five between the sides and though Ronan goaled for the Cats right on the hour, victory would be Cork’s.

The All-Ireland B final was a remarkable affair, Meath coming out on top against Offaly at Kingspan Breffni by 9-13 to 4-12.

The margin of defeat is very tough on the Faithful girls, who were excellent but were unable to handle the goal surge of their opposition, who were more than deserving winners in the end. A tally of 4-12 will win you most games but even if they hadn’t registered one point, Meath would have prevailed, thanks to their nine majors.

Meath only scored two points in the first half but their six goals had them leading comfortably against what must have been a bewildered Offaly unit, who had scored 1-7 but just could not keep the Royal attackers at bay.

A hat-trick of goals from skipper, Laura Kelly inside ten minutes set the tone, the second a classy, doubled effort, the third, after a tremendous team move and Offaly were always playing catch-up thereafter.

Róisín Kinsella, Gráinne Kennedy and Caoimhe O’Donovan and Amy Sullivan were among the point scorers for Offaly, and Sullivan had a goal but it was non-stop goal action at the other end and there was no way Offaly could hold back the tide, Kelly finishing with four majors and Ella O’Brien, Aoife Carey, Anna Foley, and Sarah Bryan raising further green flags as Kerrie Cole supplied so much of the ammunition.

Sullivan was accurate for Offaly, who had Nicola Cleary in outstanding form at centre-back. Molly Hogan drilled two goals and Orla Kilmartin another as the tricolours fought all the way to the final whistle.

A goal from Niamh Keogh in the 58th minute grabbed a dramatic 1-1 to 0-3 victory for Westmeath over neighbours Roscommon in a hard-fought though low-scoring C decider at St Brendan’s Park.

It was only 0-1 apiece at the break, with both sets of defences well on top. In that context, Ava Mulry’s two points seemed to have secured the silverware for the westerners but Keogh’s strike was definitive.

The D crown went the way of Wicklow, who were dominant throughout before recording a 3-13 to 0-3 triumph over Mayo at Kingspan Breffni.

The Connacht girls never stopped fighting and were still in touch at half-time, trailing by 0-9 to 0-2, Geri Maye Henry and Laura Flanagan hitting points but they were opened up after the restart, Aoife Campbell supplying a brace of goals and Áine Byrne another, while dual talent Laci Jane Shannon was named player of the match as the honours headed for the Garden County.