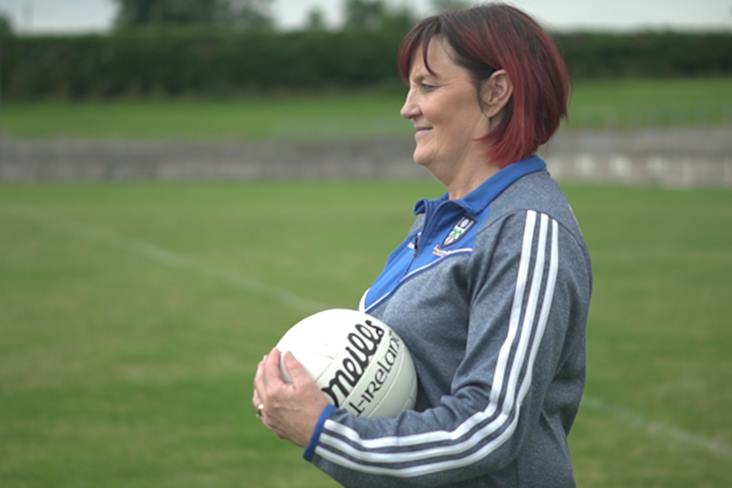 Monaghan legend Brenda McAnespie will be officially inducted into the Ladies Gaelic Football Association’s Hall of Fame at the TG4 All Star awards night.

A two-time All-Ireland Senior Championship winner with the Farney County in 1996 and 1997, Brenda was also a key player for the county team that landed the All-Ireland Junior crown in 1992.

Brenda’s glorious inter-county career began in 1991, shortly after her twin daughters, Aoife and Ciara, were born.

Scotstown was Brenda’s home club but with no Ladies Football there at the time, she began her club career with nearby Monaghan Harps.

The highlight of Brenda’s career with the Harps came in 2000, when they defeated Laois outfit Timahoe to land the All-Ireland Senior Club title.

In 2005, Brenda then completed a club transfer to Emyvale, and would famously play alongside her daughters, Aoife, Ciara, Shauna, Eimear and Aisling, at various stages.

Brenda, a three-time All Star recipient in 1996, 1997 and 1999, retired from inter-county football in the mid 2000s but she was still playing club football well into the last decade.

There was considerable glory with Emyvale, too, including an All-Ireland Intermediate club title in 2008, an All-Ireland Junior Club Final appearance in 2006, and victory at the All-Ireland Club 7s.

Brenda’s love of football stemmed from her school days, first at Urbleshanny National School in Scotstown, at a time when former GAA President, Sean McCague, was principal.

Brenda then attended St Louis Secondary School and while she harboured dreams of becoming a PE teacher, Brenda was a self-confessed ‘home bird.’

She worked briefly in Dublin, for six months with the Revenue Commissioners, before moving back to Monaghan, and taking up a post with FÁS.

Brenda worked there until 1998 before opting for a career break, and she’s been a stay at home mum ever since, while also serving as a Monaghan County Councillor for a decade from 1999-2009.

Being a stay at home mum has been an extremely busy role in its own right as Brenda and her husband, Vincie, are parents to seven children – five girls and two boys.

The children range in age from 32 (twins Aoife and Ciara) down to 14-year-old Darren.

Shauna is 29, Ryan is 27, Eimear is 24 and Aisling is 21. All five girls have worn the Monaghan county shirt in various grades, and Ciara is a three-time TG4 All Star recipient.

Ryan is also an influential member of the Monaghan men’s senior team, and this is very much a family steeped in football.

It’s not surprising that Brenda’s love of football was infused into her children and she was famously pregnant with Eimear when appearing in the 1997 All-Ireland Final with Monaghan.

While those All-Ireland successes in the mid-1990s were the obvious inter-county highlights of an outstanding career, there were also National League title wins in 1994, 1996 and 1999.

Since retiring from playing, Brenda has given back at committee level with Emyvale but she tends to steer clear of active involvement in coaching, particularly with her children involved as players.

In more recent times, there has been return to playing but in a social capacity now, as a member of the Gaelic4Mother&Others group in Emyvale.

It’s not surprising that Brenda’s remarkable life was featured in TG4’s Laochra Gael series in 2020.

This was a quite brilliant episode which was widely acclaimed and warmly received by the wider Gaelic Games community.

Among many themes explored, the programme covered Brenda’s pregnancy during the 1997 All-Ireland Final, the tragic killing of her brother-in-law, Aidan McAnespie, in 1998, and daughter Shauna’s battle with illness.

When Monaghan Ladies Football and sport in general in the county springs to mind, it won’t be long until Brenda McAnespie’s name crops up in conversation. An icon of our sport, Brenda McAnespie is a truly worthy inductee into the LGFA Hall of Fame.