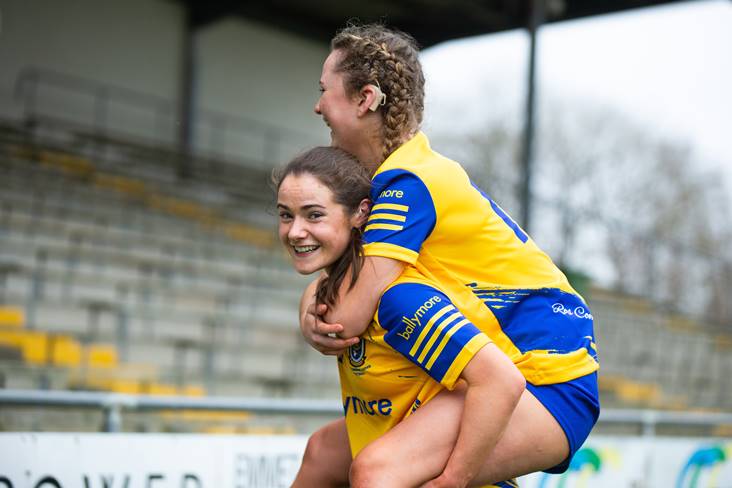 Last year’s beaten finalists Wexford will face Roscommon in the semi-finals of the TG4 All-Ireland Intermediate Championship while Clare take on Laois.

The quarter-finals took place on Sunday with big wins for Wexford, Roscommon, Clare and Laois.

The Intermediate semi-finals will be played on Sunday July 10, as well as the Junior Championship semi-finals.

The last four pairings at Junior level were confirmed on Sunday, following London’s narrow victory over Carlow. 2021 runners-up Antrim will play Carlow, with Fermanagh up against Limerick.

Aisling Hanly scored the goal and Roscommon were the first team to reach the TG4 All-Ireland Intermediate quarter-finals after their 1-10 to 0-6 victory over Louth at Kinnegad.

In the second of the double-header at the Westmeath venue, Laois continued their fine form with a stunning 6-16 to 0-8 success. Erone Fitzpatrick scored their first goal after just three minutes and there was no stopping their onslaught.

Wexford also had a comfortable win over Tyrone, although a late Emma Brennan goal put a gloss on the final scoreline. It finished 3-14 to 3-9 in Wexford’s favour in Ashbourne.

Clare were also convincing winners with their 3-11 to 0-4 success at St Brendan’s Park in Birr. Chloe Moloney’s first half penalty put Clare into the ascendency and they continued to push until the end.

The quarter-final line-up for the TG4 All-Ireland Senior Championship was decided this weekend, with reigning champions Meath set to face Connacht holders Galway.

Elsewhere, Dublin will clash with Donegal, Kerry and Armagh do battle and Cork face Mayo in the last quarter-final tie.

The Senior relegation play-offs will see Cavan versus Westmeath and Monaghan against Waterford. These play-offs will be played on July 9, with the losers of both games are relegated to Intermediate.

There were five games in the senior competition on Saturday with Dublin, Tipperary, Armagh, Kerry, and Cork all getting valuable wins ahead of the knockout stages.

The first Group A tie saw Tipperary go to Kingspan Breffni and snatch a last-gasp victory over hosts Cavan, thanks to Emma Morrissey’s penalty. It finished 2-6 to 1-8.

The other game in that group was the second of the double-header at O’Moore Park in Portlaoise. Dublin and Mayo was live on TG4 and it saw goals from Kate Sullivan and Lyndsey Davey earn a 2-14 to 1-7 success for the Dubs.

There was drama in Group B, where Armagh finished second in the standings despite a resounding 2-12 to 0-4 win against Monaghan at the Athletic Grounds.

Kerry’s 2-17 to 0-9 win over Westmeath, thanks to 1-5 from super-sub Rachel Dwyer at Fitzgerald Stadium in Killarney, ensured they went through as Group C winners.

And in Group D, Cork beat Waterford 2-10 to 1-5 in front of the TG4 cameras at O’Moore Park in Portlaoise with Doireann O’Sullivan scoring 1-7.