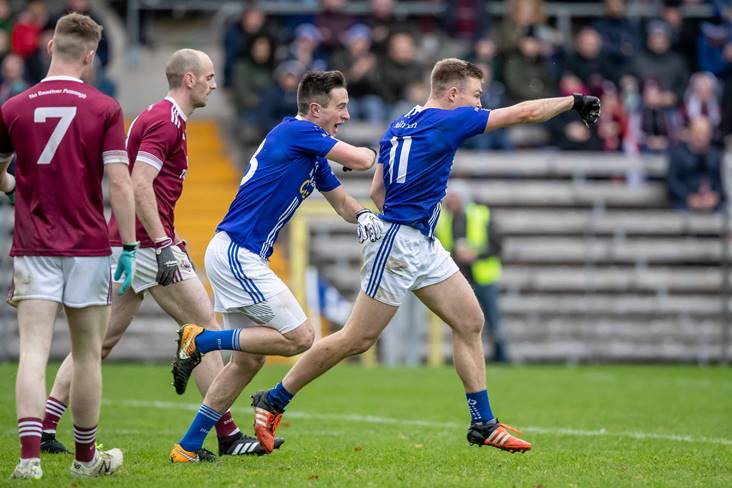 Scotstown and Ballybay will contest the final of the Green Field Foods sponsored Monaghan senior football championship following their victories over Carrickmacross and Inniskeen, respectively, in the semi finals in Clones yesterday.

Of the two Scotstown had somewhat the easier passage in that they completely dominated the second half of their game against Carrickmacross. At the end of a close first half, Scotstown were ahead by the minimum margin, 0-7 to 1-3, the Carrickmacross goal by Niall Loughman, helping them to lead briefly approaching the first half water break. The second quarter saw scores at a premium with Scotstown registering just two points from a Kieran Hughes mark and Shane Carey and Carrickmacross with Stephen Gollogly converting a ‘45 to leave the half-time score Scotstown 0-7, Carrickmacross 1-3.

In the second-half though, Scotstown took over increasingly, with Darren Hughes a driving force and Conor McCarthy almost unstoppable on the forty and by the second-half water break they had opened an eight points lead, 0-15 ri 1-14. That trend continued in the final quarter and pulled Carrick cross registered two further points, Scotstown cancelled out with a brace from substitute Ross McKenna, to win comfortably by yet points at the finish, with Carrickmacross unable to make any inroads against a well organised Scotstown defence. It finished. Scotstown 0-17, Carrickmacross 1-6.

The second semi-final was in complete contrast, turning into a thrill a minute spectacular after a quiet enough first half at the end of which Ballybay led by 2-6 to 0-5, both Ballybay goals by Patrick O’Neill. Inniskeen however were a transformed side in the second-half and with Andrew Woods, majestic in midfield and Donal Meegan and Sean Jones in excellent form up front they gradually turned it around to leave Ballybay playing catch up. Inniskeen took the lead for the first time in the tenth minute of the second-half with a brilliant solo goal by Andrew Woods as he scythed through the Ballybay defence, before crashing to the net and they went on to lead at the second-half water break, by two points. On the resumption a point from a free by Paul Meegan put them three in front, but Ballybay then struck for a goal by Christopher McGuinness as he outpaced the Inniskeen defence, to level the match and they went on to open a three points lead by the final minute of normal time. Inniskeen though were not finished and they battled back in extra time for three unanswered points to leave the sides level at the end of normal time, Ballybay 3-13, Inniskeen 1-19 and the game going to extra time.

Extra time was nail biting stuff with Inniskeen taking an early two points lead, but Ballybay fighting back to parity and at half-time in extra time the sides were still deadlocked, Ballybay 3-16, Inniskeen 1-22. On the resumption the sides traded points before an excellent point by Andrew Woods restored Inniskeen to the lead but Ballybay then struck for a fourth goal, this time Shane McGuinness stealing a march on the Inniskeen defence, before blasting home and they went on to add points by Christopher McGuinness and Paul Finlay from a mark, to open a four points lead with one minute of normal time remaining. In that time Inniskeen did pull back a point from a free by Donal Meegan, but it wasn’t enough and they were left to rue the concession of goals at vital times as Ballybay booked their place in the final with three points to spare on a final score of Ballybay 4-19, Inniskeen 1-25. There was one other championship game played in Monaghan at the weekend, the relegation final between Castleblayney and Donaghmoyne which Castleblayney won by four points to retain their senior status for next season, while consigning Donaghmoyne to intermediate ranks after just one very limited season in the higher grade.

That one finished Castleblayney 1-12, Donaghmoyne 0-11.