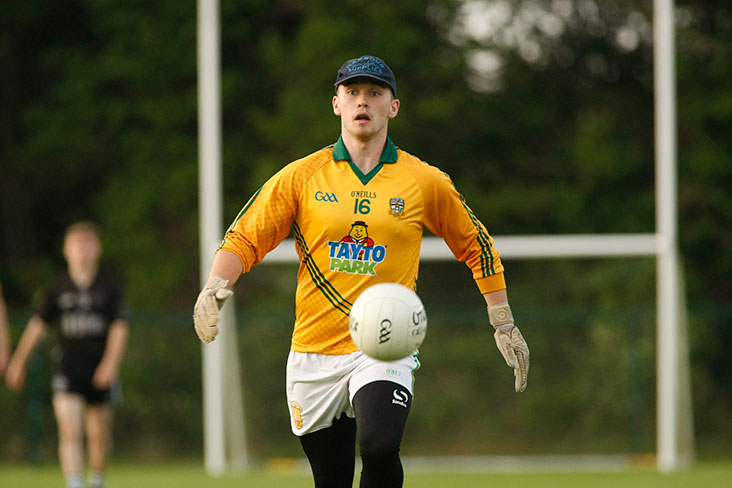 Curraha played host to their near rivals Donaghmore Ashbourne in the fourth round of the Premier Championship Division 7, on a sunny but cold evening, in a pitch perfect Joe McDermott Park, with both sides looking for a valuable 2 points in the group in order to get off the bottom of the table.

Pat Clarke got the game underway at 7.15pm when Curraha won the toss and opted to play with the wind for the first 30 minutes. Curraha made a blistering start to the match with some great team play ending with a super point off the right boot of Ruairi O’Sullivan to get the opening score of the match. Donaghmore Ashbourne hit back straight away with a point from Padraig Durkan. Curraha went on a scoring spree with Luke McCarthy getting a forty-five, quickly followed when Rory O’Sullivan kicked over another fine point to leave it 3 points to 1 in favour of the home side. Eric O’Donoghue then pounced on a loose kick out from the Ashbourne Keeper. O’Donoghue took a shot from long range and the ball bounced into the back of the Donaghmore Ashbourne net, much to the delight of the home crowd. With Curraha in the driving seat, Daniel Doran then fired over Curraha’s 4th point of the game. Donaghmore Ashbourne steadied the ship with a goal from Fergal Heffernan. It was game on when Donaghmore Ashbourne secured another 2 scores to leave it 1 goal and four points to one goal and three points midway through the first half. The Curraha keeper Luke McCarthy fired over a free off the ground for his second point of the match. Ruairi O’Sullivan got Curraha’s second goal after a great team move to leave it 2:5 to 1:3. Daniel Doran also got another score off his left foot. Donaghmore Ashbourne were not clinical in front of the goals asthey kicked numerous wides in this period. Jamie Cleary got a beautiful score off his right boot when on the right wing and on the run. Ashbourne looked rattled. Ruairi O’Sullivan added to his tally with a free before Donaghmore Ashbourne’s No. 8 got a point after a long period without a score. Pat Clarke called half time with Curraha leading 2:8 to 1:4 and Curraha were in the driving seat.

Curraha missed a few goal chances in the first half and had to play against the wind in the second. It took a while to register the first score of the 2nd half but it was worth waiting for. Daniel Doran gave a super foot pass into the sharp shooter O’Sullivan, O’Sullivan skimmed his opponent and rifled the ball into the top corner of the Donaghmore Ashbourne net. Curraha did not score again for the remainder of the 2nd half but they still played super football. The excellent saves of Luke McCarthy who saved shots from all angles kept Curraha in front . Donaghmore Ashbourne put on the pressure with the fresh legs that they brought on in the second half. Donaghmore Ashbourne’s full back Anthony Lynn scored a point from a long run up field . Curraha continued to create great opportunities and Brian Joyce almost broke the crossbar with a shot! With very little time remaining Donaghmore Ashbourne’s No. 14 scored a goal leaving the score 3:8 to 2:5 in favour of Curraha. The Curraha defenders excelled at holding off the Donaghmore Ashbourne attacks as the game drew to a close. Donaghmore Ashbourne were awarded a consolation penalty and Sam Corcoran went for a goal. Again, the safe hands of Luke McCarthy between the sticks pulled off a super save and Curraha won the match on a score line of 3.8 to 2.5, in an excellent game of football.

Curraha march on now and will play Trim in the next round of the competition – the dates to be confirmed.