FL Div 1B: A point apiece in game of two halves 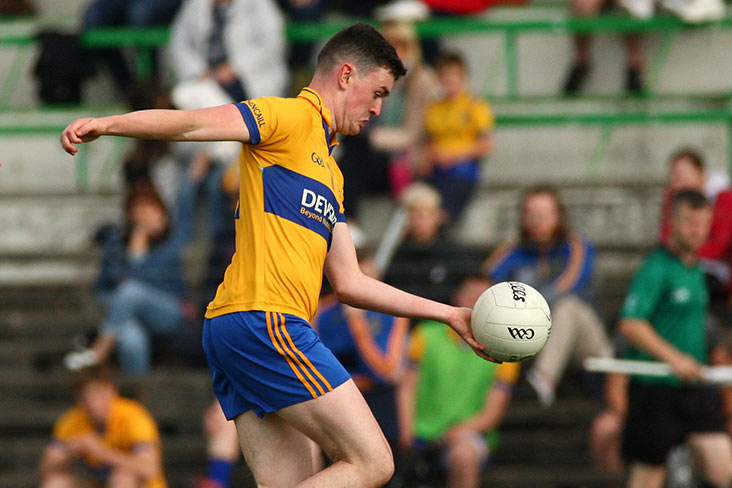 At the end of sixty minutes which contained the proverbial game two halves, Seneschalstown and Duleek/Bellewstown were ultimately left with a share of the spoils at the end of this AFL Division 1B Round 2 clash on Sunday morning. As the clock ticked into injury time, Duleek/Bellewstown had a long range free to claim both points which went wide, before Seneschalstown worked a goal opportunity for themselves at the other end but unfortunately for them went the wrong side of the post. From the kickout, Seán Gahan blew the full-time whistle, a result which felt more like a defeat for the home side given their big half time lead.

Playing with the aid of the very strong breeze in the first half blowing straight up from the old pitch, Seneschalstown got down to business almost instantly, Johnny Gilsenan putting them in front with a fine effort from out on the right, and Eoin Finnegan doubled that advantage before the second minute had elapsed. Duleek/Bellewstown, managed by former Seneschalstown player Joe Sheridan, opened their account with a free in the eighth minute, but this was answered emphatically by the hosts.

When a short Duleek kickout went awry, the Seneschalstown forwards picked up the pieces resulting in Eoin Finnegan adding his second point of the game. Johnny Gilsenan followed with another booming effort from way out aided by the wind. Seneschalstown were starting to get on top, and after a second Duleek point which made it 0-04 to 0-02, the home side went on to dominate the rest of the half using the strong breeze to good effect.

A terrific diagonal pass from Alan Mulvany was won well by Eoin Finnegan who made some space for himself to add to Seneschalstown’s lead. His full-forward line accomplice, Johnny Gilsenan’s defineitely had his radar in tune during the opening half, his third long range point of the morning left four between the sides.

With 26 minutes gone, Donal Commons managed to shrug off a number of tackles in the middle of the pitch, before taking off for the Duleek goal. After steadying himself, he popped over from 30 metres out. Not to be outdone, his older brother Seán landed a monstrous effort from over near the far side-line in the next play putting the home side six to the good.

In first half stoppage time, Seneschalstown got what looked like a crucial score in deciding the outcome of the game. A big turnover from centre back Woodley Nicholson made its way through the hands of Brian Maguire and Simon Rooney before the ball ended up with Cathal Finnegan. With just the keeper to beat, Finnegan made no mistake this time when finishing low to the net putting leaving Seneschalstown up by nine. With the half-time whistle blown shortly after, it was a great position for Seneschalstown to be in, finding themselves leading 1-08 to 0-02.

Playing into the wind now, Seneschalstown knew they would need to be patient when in possession and be wary of the threat posed by Duleek when going the other way. Cathal Finnegan drew first blood for the hosts in the second period opening up a 10 point gap but Duleek/Bellewstown kept plugging away and responded with two points on the trot. Cathal Finnegan kicked an excellent 45 to settle his side after Alan Mulvany forced a fine save from the goalkeeper, but Joe Sheridan’s side were about to enjoy their best spell of the game where they reeled off 2-03 in a five minute spell which levelled matters. With just over 10 minutes to go, Eoin Finnegan engineered an scoring chance for himself after soloing along the end line, before he took the sensible option and fisting over to edge Seneschalstown back in front.

Two more points on the trot for Duleek put them in the lead for the first time with eight minutes to go, and it looked like they were going to kick on and win the game.

However, Donal Commons had another chance to run at the Duleek defence with three minutes to go, and he was fouled as he approached the ‘D’. After something was said to the referee, the free was advanced by 13 metres to make the task a relatively simple one for Cathal Finnegan who did the necessary and tapped over the square things up once again.

Both sides had chances to win it late on, but they came to nothing as both sides left Fr. Tully Park with a point each.