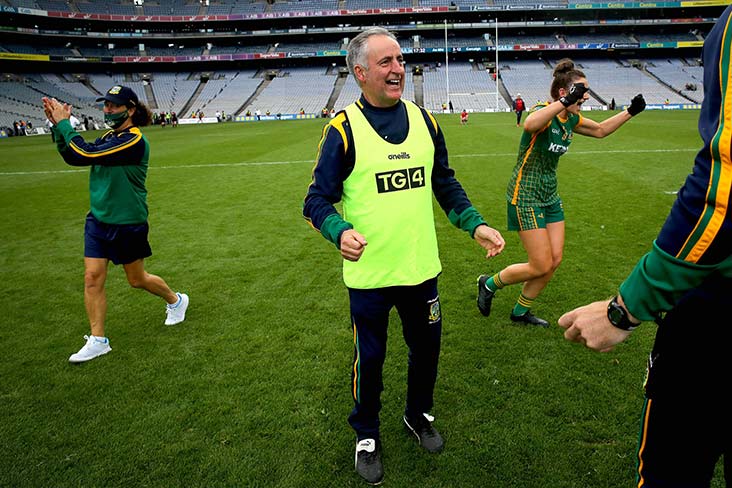 It was another thrilling weekend in the Lidl National Football League with the Division 2 holders taking their place in another showpiece event. However, Mick Bohan’s Dublin were shocked by Donegal in the other semi-final.

The Finals in Divisions 3 and 4 will be played on April 3, with Roscommon against Wexford in the Division 3 decider, while Limerick will take on Offaly in the Division 4 Final.

But the Royals return for their first Lidl NFL Division 1 Final in 16 years following their 2-12 to 1-9 victory over Mayo at St Tiernach’s Park on Saturday.

Goals from Orlagh Lally and Kelsey Nesbitt cancelled out the strike from Mayo’s Lisa Cafferky. And the Meath manager knows the significance of getting back to Croke Park, especially for the likes of Nesbitt who missed their 2021 campaign through injury.

“We were robbed that day, it was a game we should have won. We all know what happened after that game, Cork went on to win and we went to the bottom.

“(The first ten minutes of the second half today) was magic. That’s the best football we’ve played ever really. We showed what we can do.

“We won’t take this for granted at all, far from it. A national final, we are really looking forward to it. I didn’t think we’d get back to Croke Park just as quick as this.

“I’m so proud of Kelsey that she’s back and in Croke Park. This is for her.”

Donegal will join Meath in this year’s Final, after they reached their first Division 1 decider since 2017, following a stunning last-gasp 2-8 to 1-10 win against Dublin in the first game at Clones on Saturday.

Hannah Tyrrell scored Dublin’s goal and last year’s champions looked to be set for another Final but despite holding a 1-10 to 0-8 lead in the 57th minute, goals from substitute Emma McCrory and Yvonne Bonner sealed the win for Maxi Curran’s team.

“Heart stopping stuff. We left it late and we definitely got the rub of the green but look we’ll take that,” said Curran.

“We are just very happy and proud of the girls for the effort they put into it.

“It’s a day out in Croke Park now, it’ll really sharpen us up for the next few weeks at training as well which is lovely and it’s something for the girls to look forward to. It’s great for us.”

Armagh were the first to book their place in the Lidl NFL Division 2 Final, thanks to a 7-18 to 1-9 win against Laois at O’Raghallaigh Park in Cavan on Saturday.

Kerry joined them, after they defeated Monaghan, on a 1-14 to 1-11 scoreline at Tuam Stadium today.

And in Division 3, Roscommon beat Kildare 4-9 to 1-16 to earn their spot in the Final, where they will face Wexford after their 4-12 to 3-7 success against Down.

In Division 4, Limerick beat Fermanagh, 4-10 to 3-9, meaning they will take on Offaly in the Final. Offaly beat Leitrim 2-16 to 3-10 after extra-time in the other semi-final.