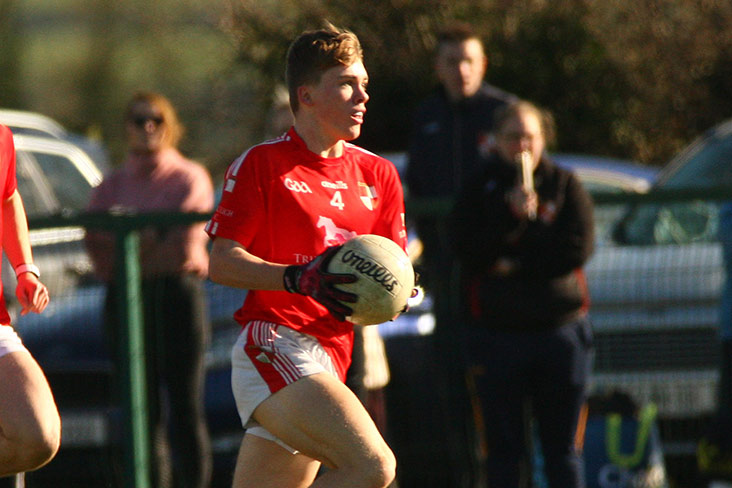 A depleted Ballinlough side made the trip to Dunboyne on a fresh and bright Sunday afternoon for this Round 2 game, with both sides looking for the first win of their League campaign and it was the home side who started sharper hitting a point in the opening seconds and almost followed up with a goal moments later, only to be denied by Matthew Farrelly in the Ballinlough net.

Declan Galligan opened Ballinlough’s account with a point from play in the fourth minute, and his midfield companion Lorcan Maguire added a second after some powerful running from Eoin Briody to create the chance in the ninth minute.

The visitors were reliant on the impressive Matthew Farrelly in the Ballinlough net to once again deny Dunboyne a goal chance in the 10th minute, but they did manage to tag on a point in the 13th minute to level up matters. Further points were traded from play with Harry Ryan being accurate for Ballinlough, and despite playing some great football the men in red were struggling to make much impact on the scoreboard sending a number of balls wide of the posts.

A Dunboyne point in the 17th minute gave them the lead, but it was to be short-lived when Ballinlough executed a perfect team goal moments later, Jack Connell with a superb block in his own half before playing the ball to Veteran Podge Muldoon, who in turned found the versatile Kit Óg Lynch, and it was his excellent pass inside that found Harry Ryan, who turned his man and finished strongly to the back of the net to give the visitors a major boost.

A Colm Mallen free in the 21st minute extended the lead and Ballinlough could have being further in front before the break when Podge Muldoon found himself through on goal after more great work from Kit Óg Lynch but he was expertly denied by the Dunboyne keeper. A Dunboyne point in the 28th minute left them with a fighting chance going into the half time break, when Referee Liam Reddy, who was consistent for both sides in excellently applying the more technical rules of the games  particularly over-carrying of the ball, blew the half time whistle, Ballinlough led on a scoreline of 1-04 to 0-05.

Ballinlough started the second half brightly with Joshua Lynch sending over a point from play in the 32nd minute in a game where it was the first time we witnessed two Lynch brothers on the field for Ballinlough at adult level for quite a number of years and what a sight it was !

Playing with the wind in the second half Ballinlough were much more dominant but again they were to rue missed chances both from play and the placed ball. All that changed in the 40th minute when Eoin Briody powered through to send the ball over the bar and moments later another of our young guns Oisin McDermott added a point to Ballinlough’s haul.

While Ballinlough were playing well and leading, Dunboyne were by no means out of this game and created several half chances themselves but the Ballinlough crew were relieved to see the ball skew wide of the lower posts on a number of occasions.

Substitute Louis Finnegan got his name on the score sheet with a well taken point in the 52nd minute, his team-mates might have being looking for the pass but the bauld Louis backed himself and tipped it over. And on a day where Ballinlough’s young men were given the opportunity to shine, another point was added when Oisin McDermott and Eoin Briody combined to fool the Dunboyne defence with a cheeky short 45’ routine which gave McDermott the additional yardage required to guarantee the ball would go over the black spot to leave Ballinlough seven points to the good with time almost up.

Dunboyne did manage to convert a free in the 59th minute, their first point of the second half, largely through no fault of their own, and more so down to resolute and dogged defending from a tight Ballinlough unit. That score was to be the last of the game, despite Referee Liam Reddy playing an additional three minutes, neither side adding to their totals leaving Ballinlough the victors on a scoreline of 1-09 to Dunboyne’s 0-06.