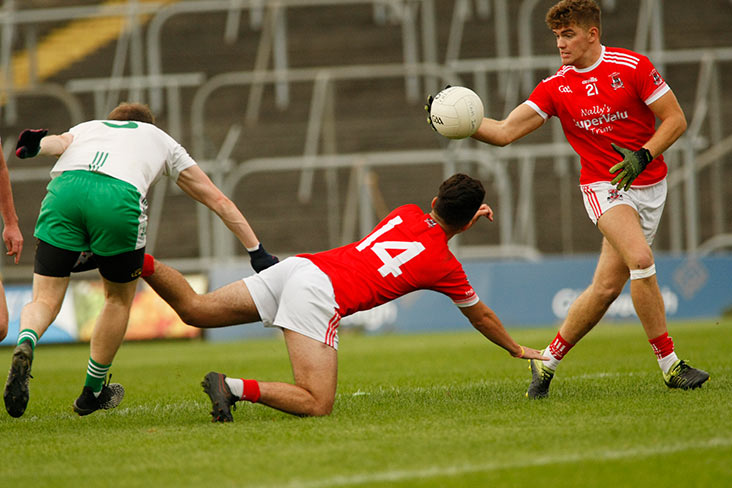 Trim's Aaron Lynch gets in his pass to Ian Bermingham despite the close attentions of St. Pats full back David McQuillan during the Corn Na Boinne final at Pairc Tailteann

Trim put in a strong final quarter to see off a spirited showing by St Patrick's who put a bad start behind them to almost claim the title.

Later Dowling had another goal attempt superbly blocked by Dermot Quinn. Despite these misses Trim moved 0-15 to 1-10 ahead at the second water break.

Sub Liam Brennan's 50th minute goal restored the lead for St Pat's but despite the attacking efforts of Shane and Donal Landy they were unable to maintain their advantage.

A significant factor in Trim's success was the contribution of their subs with Mikey Cullen getting two points, while Rob Bourke and Ben Holden got one point each with the outcome still in the balance.

When Ciaran Caulfield completed his four-point tally in the 55th minute, it was 0-19 to 2-10. The Stamullen-Julianstown club managed three of the last four scores but a late goal attempt by sub Niall Mooney in the fifth minute of added time was blocked by the Trim rearguard and his follow up skied over the bar.

With whatever benefit the strong bustery wind offered, St Patrick's hit the front within a minute of the off when Donal Landy pointed a free following a foul on himself.

Trim responded positively with four points before Donal Landy had his second score, to make it 0-4 to 0-2 with 12 minutes gone.

Kevin Reilly's men reasserted themselves with three points on the spin, including Aaron Lynch's fourth point of the half to lead by 0-7 to 0-2 at the water break.

The break seemed to tame Trim's momentum while St Pat's stormed to the front with Neil O'Flaherty's 20th minute goal central to their push.

Ronan Kearns and Daithi Whyte's side moved three points clear on two occasions in the second quarter.and led by 1-8 to 0-8 when Dermot Quinn posted their last score of the half in the 24th minute.

It was 0-11 to 1-8 at the break and no indication that the swirling wind favoured either side.

Within two minutes of resumption, Ciaran Caulfield had Trim back in front.  By the 41st minute they were a goal clear when Cullen pointed. But, there was to be another twist.