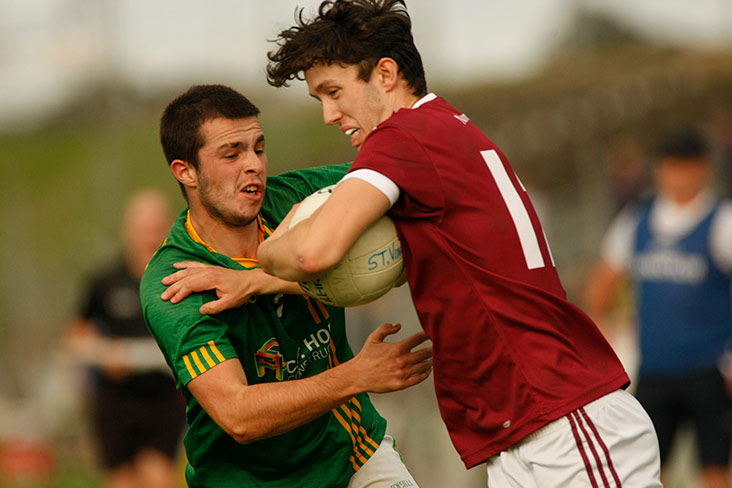 St Vincent's battled numerical deficiency and the elements to overcome Castletown in a thrilling Tailteann Cup final at Pairc Tailteann on Saturday evening.

A poor opening quarter coupled with Mark Crawley's 12th minute red card didn't bode well for the Ardcath side who trailed 0-2 to 1-3 at the first water break.

Then water in the form of torrential rain threatened to make life difficult for both teams. St Vincent's responded better in adversity, outscoring Castletown by 1-4 to 0-1 in the second quarter.

Hugh Durrigan's men set about trimming the deficit in a measured manner and reached the interval leading by 1-6 to 1-4.

Robert Tallon's 29th minute goal earned the holders the lead they took to the finish.

In their third Tailteann Cup final appearance on the spin, St Vincent's boosted their bid for JFC honours in retaining a title they won just two months ago.

Their strong start bode well for Castletown in their bid to improve on their 2020 Corn na Boinne final defeat two months ago. St Vincent's emerged victorious in a JFC round robin fixture earlier. Both sides made it to the business end of this year's renewal.

Declan Cribben's second point, within a minute of the restart and the margin was down to the minimum.

As the Castletown scores dried up, St Vincent's set about putting distance between themselves and the north county side.

Wing-back Conor Harford and wing-forward Eoghan Corry shared six points from play over the hour and combined it with tremendous work rate for the holders.

At the back Gary Tuite shone in a tenacious defence that leaked just three points in the second-half.

Within moments of his introduction as a sub at the second water break, Castletown's William Bellew was black carded with just three points between the finalists, 1-9 to 1-6.

Less than 10 seconds in and Castletown were ahead thanks to a solo effort from Declan Cribben. Colm Coyle's men were on the front foot for most of the opening half. Five points were scored in the opening nine minutes.

The scoring rate dropped thereafter. Significantly, Robert Hoey got the next score, fielding Evan Hoey's delivery he netted at the town goal, leaving it 1-3 to 0-2 at the first water break.

In the 12th minute St Vincent's had Mark Crawley dismissed. The manner in which they responded to adversity made them worthy of retaining the Tailteann Cup having outscored Castletown by 1-11 to 0-4 over the final three quarters of the game.