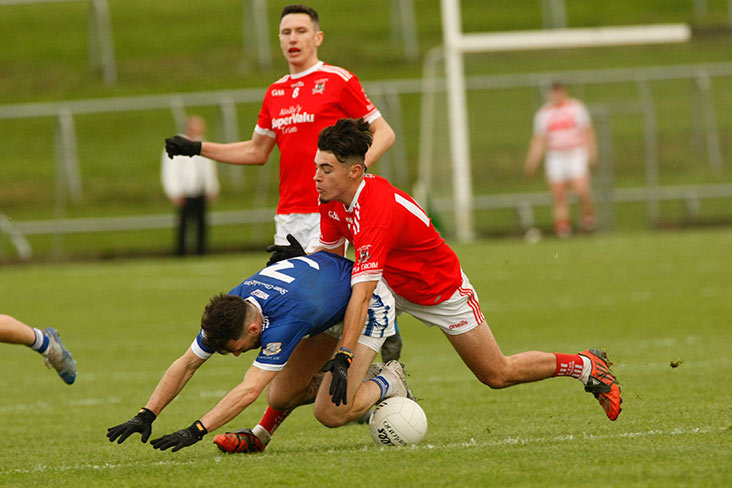 Unburdened by recent history that saw them lost the last two IFC finals, Trim were always in control here.

There were some impressive aspects to their success. When goal chances were abegging, they kept going.

They didn't leak a goal due to some tenacious tackling while goalkeeper Peter Farrell did his best when called on.

With O'Mahonys' man and former county player Kevin Reilly at the helm, Trim were ready, willing and able to put recent history behind them.

Trim were never headed and the sides were level just once, and not for long. There was no rain during the course of the game but strong blustery, particularly in the opening half, dampened the scoring.

The team in red were well deserving their success. It goes along with their Corn na Boinne triumph just over two months back.

Their goals came wrapped in text book finish. Declan Dowling got the first, the game's opening score, in the eighth minute. Rob Bourke and Mikey Cullen played supporting roles to the corner-back who appeared to be tailing Robert Farrelly

Aaron Lynch and Daire Lynch also had opening for goals in the early stages. Oldcastle had the game's first, in the third minute, when Garrett O'Reilly was denied by a brave double-save from Farrell.

Trim took that advantage to the finish. Further boosted by Eoin O'Connor's textbook goal, with assistance from Mikey Cullen, they went on to lead by 2-4 to 0-5 at the break.

From the restart, Trim gradually increased their lead with Aaron Lynch coming to the fore. He finished with 1-5. His first four points came from a free, a 45, a mark and play.

Patrick Rahill completed Oldcastle's tally with a point from outside the 'D'. Jude McNabb's men tried but couldn't breach the Trim defence. Bourke and Eoin O'Connor created the opening for Aaron Lynch to net in the 53rd minute.

A finely judged Toher free was followed by team captain Alan Douglas's effort from play wrapped up the scoring before the latter accepted the Mattie McDonnell Cup.