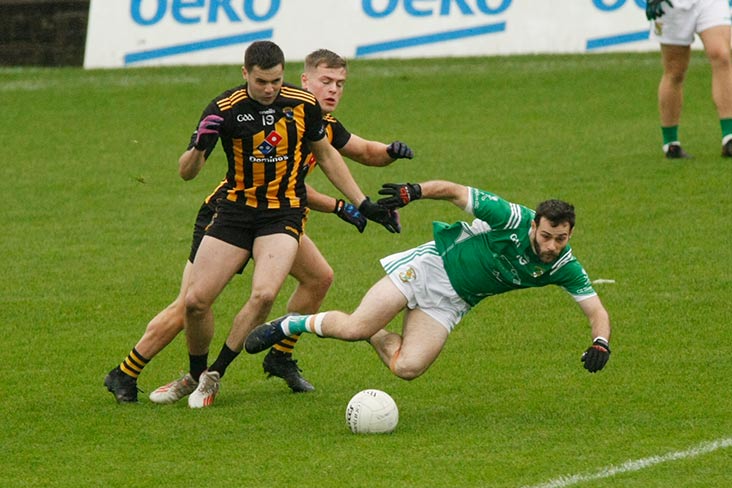 In a low-scoring clash of attrition, Dunboyne dug out a narrow win over Donaghmore-Ashbourne in the first SFC semi-final at Pairc Tailteann

The squally, sometimes wet, conditions probably dampened the scoreline. Dunboyne strength prevailed and they led from the 22nd minute to the end.

However, there was only one occasion when there was more than a score between the sides until a late brace of points secured the final spot for Dunboyne.

What the game lacked in scores it also lacked in excitement. However, Dunboyne achieved their goal in a fixture that bore hallmarks of chess.

Only two of the game's 11 scorers managed more than a single flag. Cathal Finn's trio of points from play were a significant contribution to Dunboyne's tally.

Ahead by 0-4 to 0-2 at the break, Dunboyne doubled their lead within seven minutes of resumption through Donal Lenihan (free) and Stuart Lowndes.

Four points down in a low-scoring game, it could have been worse for Donaghmore-Ashbourne but for Andy Colgan's goal-stopping save from Niall Jones in the 39th minute.

Mick Deegan's side were let down by some bad wides, including Bryan Menton's 41st minute effort when a goal seemed on.

Points from Thomas and Darragh McGovern trimmed the deficit to just two, 0-6 to 0-4, with 43 minutes gone. Before the second water break, Finn pointed to leave his side  0-7 to 0-4 to ahead..

The aforementioned Shane Melia point kept Donaghmore-Ashbourne in touch, 0-5 to 0-7. That was as good as it got for the team in green.

In less than ideal conditions the opening quarter yielded just four scores and as many wides. Both sides enjoyed spell in pole postion. First, Donal Lenihan pointed a 45 in the third minute.

Donaghmore-Ashbourne failed to register for the remainder of a poor opening half. It was 0-2-each at the first water break while the sides shared four wides in the opening quarter.

Despite the backing of the elements Dunboyne managed just two more scores before half-time. Cathal Finn's efort was the pick of the pair while Gavin McCoy - pushing forward - got the other.

Dunboyne led by 0-4 to 0-2 at half-time. Despite playing with the wind Donaghmore-Ashbourne managed just three more points.