Leinster MFC: Royals power into next round 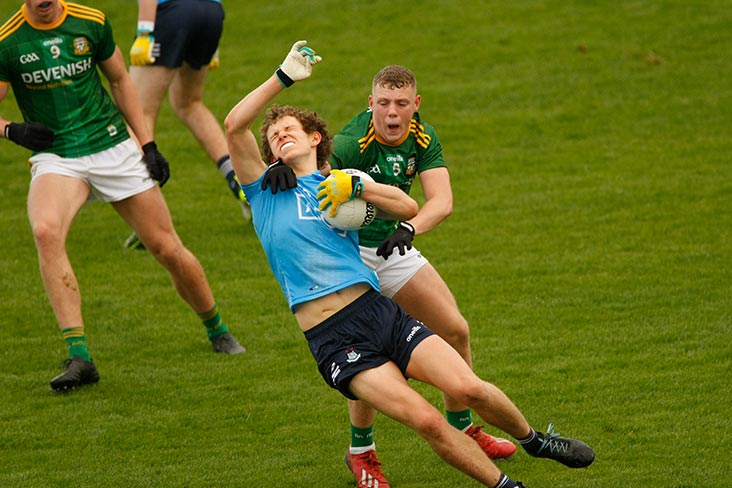 Meath registered 1-8 without reply from the 38th minute to outscore Dublin in this Leinster MFC round one clash at Pairc Tailteann on Saturday afternoon.

Up to that point the sides had been level six times and a tight finish looked likely.

However, by the second-half water break, Meath were double scores clear and set for a meeting with Westmeath in the next round.

Summerhill's Eoghan Frayne led the way with seven points. Two of his points (one free) came in quick succession around the 40th minute giving the home side a 0-9 to 0-7 lead which they built on over the time remaining.

Meath's position was significantly enhanced in the 45th minute when John McDonagh's delivery broke to his Dunshaughlin clubmate, Aaron Murphy who dispatched to the net.

It was followed by a brilliant point by another Dunshaughlin club member, Conor Gray to leave the board reading 1-12 to 0-7 in the 46th minute.

Dublin besieged the Meath goal but to no avail. Meath closed the scoring in stoppage time with Kinsella's third point following a strong run by Ciaran Caulfield.

Having played with the wind in the first-half Dublin could have been comfortably ahead at the break but first seven first wides undermined their cause.

The sides were tied at 0-4-each at half-time. Despite playing into the town goal and the elemets in the second-half, it took Dublin just 19 seconds to regain the lead through Luke Ward.

Before the first minute of the second-half elapsed Meath levelled through Kinsella. Two Frayne points were sandwiched by a similar score from Dublin from Eoghan O'Connor Finnegan.

A poor first half yielded just eight scores.  Within eight minutes of resumption a further six points were added.

Dublin's Luke Breathnach's point leveled matters (0-7-all) for the sixth and final time before Meath pulled clear to advance to the next round.

Wexford underage football final postponed because no goalposts were available