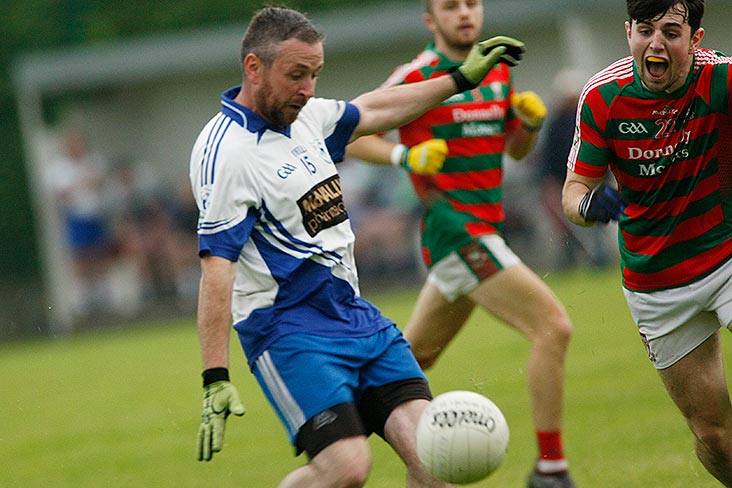 Stephen Kiernan is about to fire over another point for Kilmainhamwood during their league clash against Kilbride.

Kilbride made the long journey for the eagerly awaited return of competitive football to Kilmainhamwood on a drizzly evening in the Wood.

Strict guidelines in terms of attendance were adhered to at the gate and players arrived and togged out in their own cars. Hopefully this will not be the ‘new normal' in the future.

Anyway, to the action. A nervous start from both sides, led to the ever reliable Stephen ‘Peewee' Kieran kicking the first point of the game in the 4th minute, before Kilbride scored their first point a minute later.

The Wood then raced into a 3 point lead after kicking 3 points in quick succession. Kiernan again with a double, the second after a tremendous low stop to his right from Goalie and Chairman, Alan Carolan. Niall Conlan got on the scoresheet with some great team work, right from the full back line. Kilbride kicked the next 3 points without reply to leave matters level at half time, 5 points a piece.

The Wood were quick off the block in the 2nd half, when a long ball into the full forward line found that man Kiernan, who buried to the back of the net with 30 seconds played in the 2nd half.

Kilbride kicked the next 2 points to leave the bare minimum between them before Callum Crosby brought 2 between them again, after great work from Substitute, Richy Corbally.

It was to be the Peewee show after that. Kiernan brought his shooting boots with him tonight, scoring 1-2 without reply, including a penalty on 47 mins, to leave 7 points in it with 11 mins left. The penalty was dispatched coolly by The former Meath Minor, which came about after great work by Niall Conlan.

In fairness to Kilbride, they didnt come all that way to roll over lightly. They battled back bravely and scored 1-2 without replying to leave 2 points in it. It really should have being closer if they hadn’t kicked some aimless wides. They also lost a man to a red card with 4 mins to go, after an off the ball incident.

Kiernan then kicked a beautiful score on the run from a tight angle to leave 3 between the sides again. It proved to be the last score of the game and give the Wood their first victory of this newly arranged Division  4a Campaign. It gave Peewee a personal tally of 2-6

The Wood looked good at times and nervous at other times. The blend between the youth and experience worked well tonight. There is still work to do before Championship v St Bridgids on Saturday week, but it was a well fought win tonight against a battling Kilbride side, who gave nothing away easily.

There was many performances tonight that caught attention. Niall Conlan impressed with his direct running at the Kilbride defence. Callum Crosby showed his undoubted talent. Paul Carolan played his best game in a Wood Jersey in some time. Cathal Bennett seemed comfortable in his new full back slot.  However, we might be in different times, but some things never change with Stephen Kiernan scoring for fun.

All in all, it was great to be back for football in the Wood on these summer evenings.