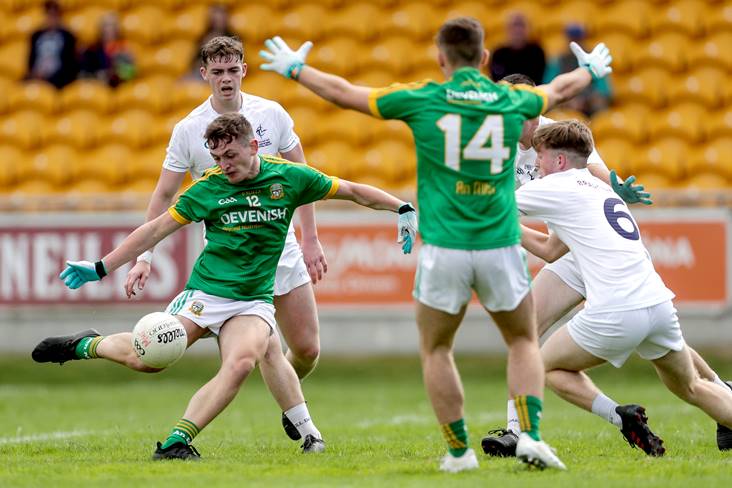 Luke Mitchell fired eight points for the Royals, including five in the opening half in a game where Joe Treanor's charges always looked good.

Indeed the Royals margin could have been greater, but for a late consolation goal for Kildare from Marcus Kiely, and also some superb saves from Lilywhites keeper John Ball, particularly in the second half.

Dunshaughlin clubman Mitchell opened his sides account with a pointed free after three minutes, with Meath pushing 0-6 to 0-1 clear after 14 minutes, and six different players on target at that stage.

Meath were sniffing out any chance of a Kildare opportunity quite well, with James O'Hare turning over the ball, after an Eoghan O'Haire fisted miss for Kildare in the opening five minutes.

The Royals drove on, with scores from Luke Kelly, Bryan McCormack and Darragh Swaine from play ensuring a 0-4 to 0-0 lead, before Kildare's first score on 11 minutes, when Sam Morrissey sent over a free.

This was the first time that Kildare really threatened but they failed to build on this, with just two more points before the break - back-to-back scores between the 16th and 18th minutes, after Mitchell became the first player to score a second point for the Royals.

Jack Smyth and Alex Beirne found the target for Kildare to ensure an 0-8 to 0-3 score-line, before Kildare's first substitution with Padraig Behan replacing O'Haire.

David Bell grabbed his second point, before four unanswered scores from Mitchell ended the half with the Royals holding an 0-11 to 0-3 lead.

Mitchell brought his tally to sevven points with back-to-back scores from play at the start of the second half, and although Kildare responded with a 33rd minute free from Smyth, they wouldn't score again for a further 19 minutes.

Meath threatened for a goal, but John Ball denied Matthew Costello with a point-blank save, before again putting in an excellent block on the rebound.

Kildare were living dangerously at this stage, with Meath eventually breaking through thanks to a 37th minute Bryan McCormack goal.

Kildare began to empty their bench with Drew Costello and Sean Englishby introduced.

Indeed the Lily's had all of their subs used, before Meath introduced their first - Oisin McCloskey coming in for Conor Harford in the 45th minute.

Costello put Meath 1-15 to 0-4 ahead with nine minutes of normal time remaining, but the Royals didn't score again, as Kildare finished strongly.

Kildare battled until the end, with Muiris Curtin, Marcus Kelly and Behan registering points, before Kiely claimed/ their lone goal in the third minute of injury-time.