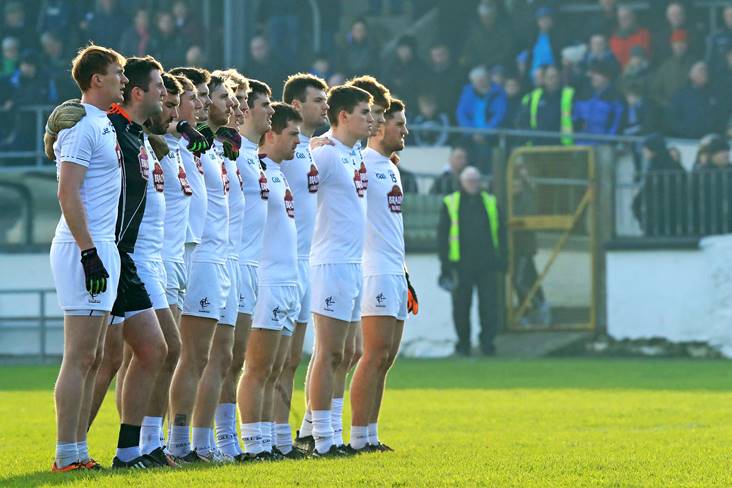 The Kildare team stand for the national anthem.
©INPHO/Donall Farmer.

I know everyone is singing Kildare's praises and more power to them for fighting their corner but this is going to mean pure chaos in Mayo. GAA made a mess of this but no way a ground of 8-9,000 capacity should be an automatic home venue. Power needs to be with GAA to change 1/2

Only eight thousand tickets available for Kildare vs Mayo at the weekend? Should have moved it to a bigger venue.

This was about more than us, but the wider GAA community finally coming together to challenge ridiculous decisions made my Croke Park who are out of touch with grassroots. A turning point for us all that will hopefully result in fairer treatment all round. #newbridgeornowhere

Meanwhile in Kildare...
He's not even landed and he's working Miracles. #NewbridgeOrNowhere pic.twitter.com/SShGxa6ToK

This week has been a disaster for Mayo...the Kildare team and crowd will be incredibly defiant now...very hard to see Mayo winning now

Big victory for Kildare today but really it's a a victory for all regular folk in the GAA. Hopefully the GAA will take a look at exactly what has happened over the last 48 hours and learn big lessons from them.

Great to see the right result being reached. It's now time to move all attention back to what really matters. Letting the players perform. As Jackie Moon once famously said... #ELE #Kildare # Mayo #GAA pic.twitter.com/AJWqpFXJHE

Well done @KildareGAA proper order. Took time but @officialgaa did the right thing. Let's get on with the the now. Enough rubbish all week and not Kildare's doing. https://t.co/E87nfdNpE3

A win for the little (thugs that will cause trouble outside ground on Saturday - accord to GAA ‍) people!!! https://t.co/wvy78yTPoz

Ah lads going to be impossible trying to get tickets for Newbridge Saturday evening. Any chance the @officialgaa can move it to a bigger venue? #NewbridgeOrNowhere

Fair played to @KildareGAA . People on here saying more pressure on them to win now. Nonsense. They stood their ground to ensure they didn't lose an advantage that was rightly theirs. Well done and may the best team win now #GAA #NewbridgeOrNoWhere

It's amazing how time & time again certain journalists always argue in favor of the #GAA stance on issues...if u were of a suspicious mind u might nearly think they are being told what 2 write....