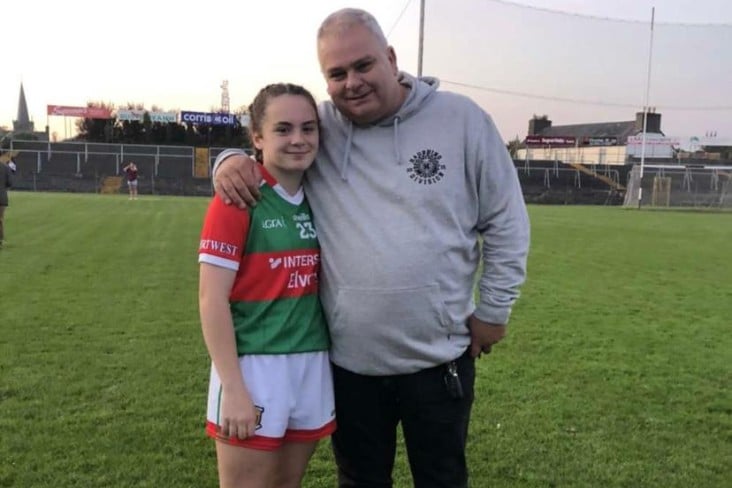 The Play4Emma GoFundMe page set an initial target of €10,000 but by Tuesday, they had already eclipsed seven times their goal.

Denise Carroll is a family friend of the Langans on the outskirts of Killala in County Mayo. She has organised the fundraising efforts to help 14-year-old Emma Langan recover from her cancer diagnosis.

The Mayo underage star, whose mother passed away from cancer just three years ago, was told she has leukemia last week. And now the local community has come out in force to provide a helping hand.

Moygownagh will host the Play4Emma Fundraising Day this afternoon. There will be Halloween Fancy Dress for all age groups in the hall at 3pm, along with Halloween games, and tricks and treats. Then, at 4pm, St Brigid’s U-16 will face McHale Rovers.

There will also be music and refreshments after the match and all proceeds will go to Emma and her family.

“This is all going to help with medical expenses, travel costs, food, and any other expenses that are involved throughout Emma’s treatment plan,” said Denise Carroll.

“There will be buckets on the gate. We are selling raffle tickets. There are so many generous spot prizes from all the local businesses far and wide. It’s not even just in the small community you have here alone. It’s the towns of Ballina, Crossmolina, Lahardane, Killala, Ballycastle.

“Everyone is pulling together and trying to raise as much money as possible. Every cent is needed and every cent is so greatly appreciated, by the community and Langan family. Everybody wants to do what we can and that’s all we can do for now. Fundraise, fundraise, and fundraise.”

Emma Langan has four sisters. Ciara, Niamh, and Siobhan (23) are triplets, while Orla is 21. And their family was rocked in 2019 when they lost their mother.

Yvonne Langan was diagnosed with breast cancer a day before Emma’s first Holy Communion. She received treatment in Castlebar and Galway before getting the all-clear. However, when her cancer returned it had spread to her spine and liver, and her condition deteriorated before she passed away in 2019.

Meanwhile, Emma continued to excel on the sports field and she played Ladies football for the St Brigid’s club before she went on to represent her county last year at U-14 level. She has also shone on the soccer pitches and she plays with Killala and Mayo U-16s.

But she began to complain of pains and aches and her symptoms gradually worsened over time.

“It started off with pains in her shoulders and her hips,” said Ciara Langan. “And obviously, because she's so sporty, and she was still playing football, we presumed that she had muscle pain, maybe because she's growing as well. So dad bought her to get X-rays and they came back clear.

“We just thought it was still a muscle pain and growing pains. But then last week, she started coming out with bruises all over her body. They weren’t the normal bruises that you would get if you hit off something. It was just really big bruises and really dark, and just very random spots on her hands and all over her arms.

“She was very pale too and she couldn't really move her shoulder either. So dad knew there was something wrong and Emma was a bit worried because she didn't know why she was coming out in bruises. She wasn't at training or anything to get the bruises.

“Dad brought her into the doctor. The doctor just said he would send her straight up to Castlebar. And then that's when they started doing all the blood tests.”

It turned out to be leukemia and Emma was subsequently sent to Crumlin Children’s Hospital in Dublin. She began her treatment there this week.

“Treatment was supposed to start on Monday but her bloods were too low,” said Ciara.

“But they took her down at 2pm on Tuesday to get a bone marrow procedure and she got a little tube put into her arm too. So, two procedures that she had to do before she started her chemo.”

The chemotherapy treatment has begun and Emma will be at high risk of infection in between sessions. Therefore, she will likely spend much of her time in Mayo General Hospital.

She is in 3rd year at Gortnor Abbey, Crossmolina, but her Junior Cert studies will have to wait for the time being as she focuses on her rehabilitation. In the meantime, her friends and family are continuing their efforts to help in any way they can.

Her sisters made the initial trip to Dublin at the weekend but three of them have returned home to try and find some sense of normality in the most testing of times.

“I just came back on Monday night because I'm in college in Limerick,” added Ciara.

“So I came back and on Tuesday morning, we just kind of took the house apart and cleaned it so dad and Emma have nothing to worry about when they come home.

“Just making everything more comfortable. Just getting ready to bring her home really.”

And while preparations for today’s charity event and fundraising gathered even more momentum, the community rallied around their beloved Langans, who have been through so much.

“All the girls wanted to come together and do something for their friend. They want to show their support and they don’t know how else to do it only get out on the field,” added Denise Carroll.

“We were hoping Emma could be there but obviously she will not. There will be games, music and events happening for Emma’s little friends in the community.

“So many people have come together, so many are so generous, too many to name. Everyone is overwhelmed with the amount of support that the Langan family is receiving. We are so happy that we are able to do it. We just want to bring Emma home.”

And for Emma, she is amazed by the support she has received. It has given her strength and helped her through the first week on her road to recovery.

“Like, there hasn't been one day since she's been diagnosed that she hasn't laughed or smiled. She has taken it in her stride.

“I know how she's doing and I just have never seen anyone so brave and positive than the way I've seen her being in the last week.”

Find out more at https://www.gofundme.com/f/play4emma