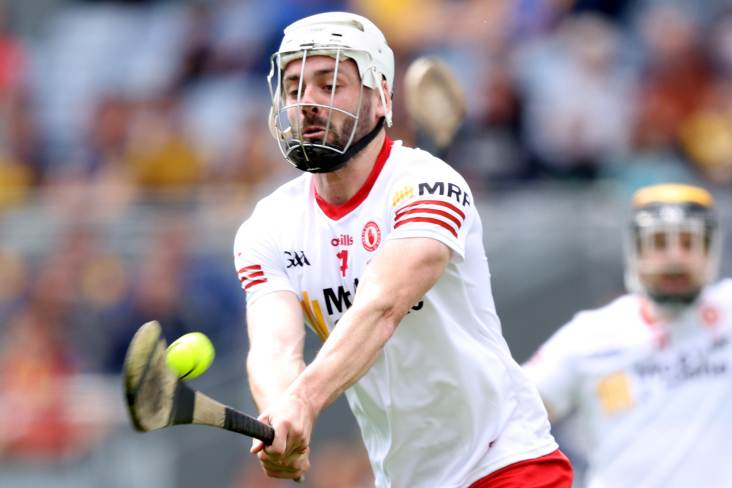 The late Tyrone hurling star, Damian Casey, has been named at wing forward in the Ring, Rackard, and Meagher Team of the Year for 2022.

The 29-year-old Dungannon hero tragically passed away last June. Regarded as one of the  greatest hurlers to come out of the Red Hand County, he scored in every one of his 40  appearances and contributed 0-14 to their tally in their Nickey Rackard Cup final victory over  Roscommon at Croke Park.

His poignant selection is the fourth year in a row he has featured on the Ring, Rackard, and  Meagher Champion 15 selection, and he is one of three Tyrone hurlers to be named with  defenders Dermot Begley and Chris Kearns also honoured on a team made up of players  from eight counties.

Former Mayo football all-star Keith Higgins, who captained Mayo to the Rackard Cup last  year and reached the Ring final this season, is named in the Champion 15 for the second  straight year.

Darren Geoghegan, scorer of 0-9 in the final, is the representative of Lory Meagher champs  Louth with beaten finalists Longford represented by midfielder Paddy Lynam.

Uachtarán CLG Larry McCarthy said: “Congratulations to all of those who have been selected  and honoured with a place on this prestigious Champion 15 for the Ring, Rackard and  Meagher Cups.

“These competitions deliver great games every season and offer players in these counties  the chance to perform on the biggest stage of all for an All-Ireland title at Croke Park.  Although it is a team game we play, it is only right that we have an opportunity to salute  those who have been truly inspirational and influential.

“Your award is one that will be shared by your families and the clubs and communities you  proudly represent and in celebrating this occasion we also pause to acknowledge the empty  chair that should have been filled by the great Damian Casey and honour his memory and  keep him and his loved ones in our thoughts and prayers.”

Tom Parsons, GPA CEO, added: “These competitions continue to provide an opportunity for  not alone teams, but also individual players to show the depth of talent hurling has right  across the country. In Kildare, Tyrone and Louth we had worthy winners but it’s great to see  eight counties represented on this team. Each player selected is very well merited.

“I want to celebrate the life and hurling talents of the late, great Damian Casey. He again  showed in 2022 that he was a hurler that would grace any team or competition. But more  than that, he was a son and a brother, a teammate and a friend, a leader and a role  model. Awards seem insignificant given the loss his parents Seán and Susan and his sisters  Louise and Catherine are faced with, but I hope this award will act as a reminder to them of  the esteem Damian was held in by the Gaelic games family. He will never be forgotten by  his fellow players.”

Nominations came from the players who voted for the best performing players from their  competition. This list was deliberated on by an independent selection committee to decide the final 15.

The awards will be presented at a gala black-tie banquet in Croke Park this Friday night, where the Joe McDonagh Team of the Year and the Tailteann Cup Football Team of the Year  will also be honoured in an event that will be streamed live on www.gaa.ie . The overall  players of the year will be announced live on the night.