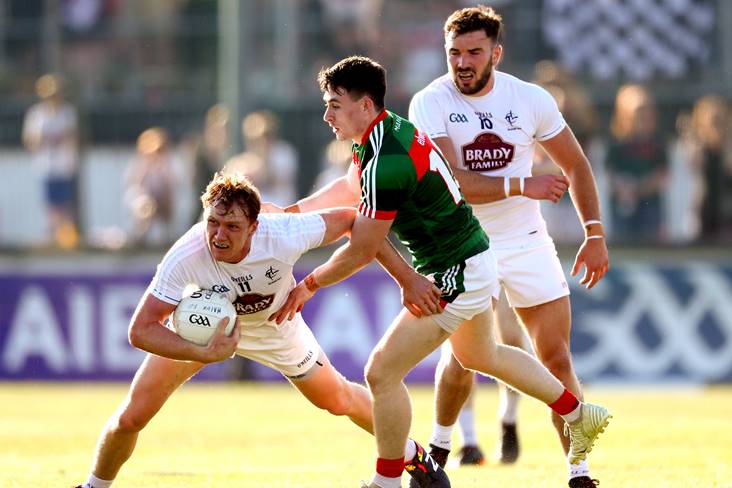 Kildare are into the fourth round of the Qualifiers after a magnificent 0-21 to 0-19 victory over Mayo in  pulsating encounter at Newbridge.

Manager Cian O'Neill and the Kildare County Board dug their heels in last week, insisting that they wouldn't play this game anywhere else and, having won that battle, they didn't disappoint tonight, confidently outshooting last year's beaten All-Ireland finalists in a memorable shootout in blazing sunshine at St Conleth's Park.

The wonderful winners are now one win away from the inaugural Super 8s. In Monday morning's draw, they will be pitted against either Roscommon, Laois, Cork or Fermanagh in the last round of the backdoor series.

The sides shared 18 points during the course of a breathless first half. Kildare got off to a flier but six unanswered points between the 17th and 28th minutes saw Stephen Rochford's men roar ahead, 0-8 to 0-7.

The Lilywhites started with tremendous intent and led by six points to two after 15 minutes. Fergal Conway cancelled out Stephen Coen's opener before Neil Flynn and Kevin Feely made it 0-3 to 0-1. After Andy Moran replied, Daniel Flynn, Neil Flynn (free) and Paul Cribbin left the hosts in command.

Neil Flynn arrowed over a '45' to increase the gap to five but a couple of extremely soft Cillian O'Connor frees handed the visitors a foothold in the game. A thumping Paddy Durcan score had Mayo back within two after 21 minutes and O'Connor stroked over another free to make it a one-point game.

The sides were level for the second time on 25 minutes when Durcan slotted his second and Mayo's fifth without reply; an O'Connor free that was brought forward for dissent was duly despatched as the Connacht county edged ahead; Cribbin replied with a peach - Kildare's first score in 14 minutes - but a stunning Diarmuid O'Connor finish instantly restored Mayo's advantage, 0-9 to 0-8.

Neil Flynn's tap-over free drew Kildare level again a minute from the interval and it was all to play for as the teams retired from the scorching cauldron for a deserved break.

Moran and Flynn traded the first two points when the action resumed and there was also an exchange between Cribbin and O'Connor (free) before Neil Flynn's free cancelled out Durcan's third. Kevin McLoughlin and Jason Doherty steered the visitors two clear but Neil Flynn (free) and Cribbin were on hand to tie the scores up once more, 0-14 each after 48 minutes.

Doherty and Daniel Flynn pointed at either end as the teams remained deadlocked with 15 minutes left. Then came the telling surge: a stunning Kevin Feely point had the hosts ahead and wing back Johnny Byrne registered a third unanswered Lilywhites point as they moved 0-17 to 0-15 ahead with 13 minutes remaining.

Neil Flynn tapped over a simple free in the fourth added minute to double Kildare's lead and substitute Eamonn Callaghan added another in the 76th minute. Mayo had Aidan O'Shea sent off on a second yellow card at the death and a last-gasp Moran free flew over the bar as Kildare claimed a famous victory.

How far has this Kildare side come since losing their championship opener to Carlow?