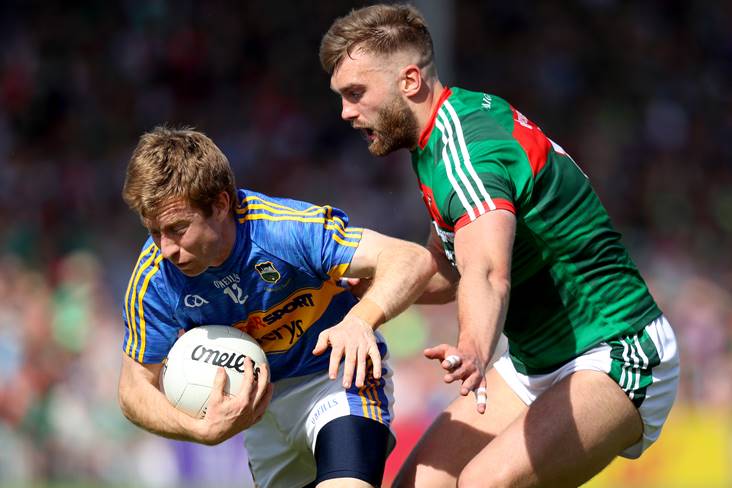 Mayo finished like men possessed to defeat Tipperary by 1-19 to 1-11 at Semple Stadium.

Michael Quinlivan's goal had Liam Kearns' charges three to the good with just over 20 minutes remaining but Mayo outscored their spirited hosts by 1-9 to 0-1 from the 49th minute onwards to power into the third round of the Qualifiers.

Quinlivan's goal had Tipp ahead by 1-7 to 0-8 at half time, with himself, Conor Sweeney, Brian Fox and Steven O'Brien all impressing.

Mayo started brightly with the first four points but were rocked when Quinlivan fisted Josh Keane's high delivery to the back of their net in the eighth minute to tie the scores up, 1-1 to 0-4.

Philip Austin nudged the Premier ahead for the first time and scores from Liam McGrath (free) and Conor Sweeney saw them move 1-4 to 0-5 clear with 20 minutes played.

James Durcan and Cillian O'Connor (free) drew the Connacht county level and David Clarke executed a fantastic save to deny Quinlivan his second major before McGrath popped over a free to restore Tipp's advantage.

The visitors were dealt a blow before the break when they lost Seamus O'Shea to a shoulder injury (they'd also bid adieu soon after to the back-carded Colm Boyle) and Jack Kennedy's point doubled the Premier's advantage with half an hour gone, 1-6 to 0-7. O'Connor hit back from a free but Quinlivan lofted over a stunning injury-time point to give his side a two-point cushion at the interval.

Jason Doherty and O'Connor (free) brought the winners level within three minutes of the resumption but Quinlivan, McGrath and Sweeney replied to leave the goal between them after 46 minutes, 1-10 to 0-10.

Incredibly, Mayo led by the three-quarters stage, Kevin McLoughlin making it 1-12 to 1-11 after Durcan traded points with McGrath and then fortuitously netted when he appeared to be going for a point. The Mayo goal arrived in the 52nd minute when Durcan's weak shot dropped into the top left corner of the Tipp net to tie the scores up at 1-11 apiece. Eight unanswered points would follow...

Doherty curled one over off the outside of the boot to double the difference with 13 minutes left and Paddy Durcan, Doherty and Andy Moran pointed as Stephen Rochford's men moved five ahead with an hour played.

Lee Keegan slotted a trademark point three minutes from the end and there was time for Conor Loftus (free) and McLoughlin to add to the winners' tally before the final whistle.