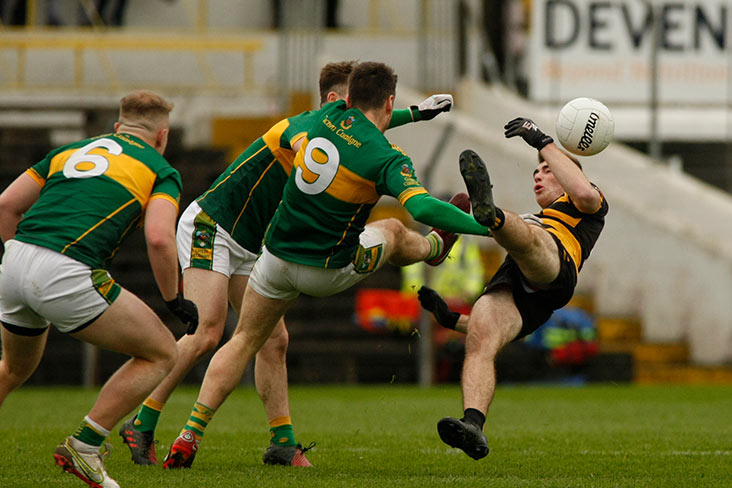 Dunshaughlin proved too good for Cooley Kickhams in this Leinster Club IFC at Pairc Tailteann early on Saturday afternoon.

Apart from a brief spell early on, Dunshaughlin were never headed while the scores were tied just once when Mathew Costello cancelled out Brian White's opener for the Louth side.

Fethard St Mogue's will be Dunshaughlin's final opponents with the Wexford side having home advantage in the final on Saturday, December 3.

Credit to Cooley Kickhams for doing their bit to keep the scoreline down. However, Dunshaughlin were guilty of coughing up possession.

Once again John McDonagh was prominent in the scoring stakes for Dunshaughlin with four points from play. He achieved that despite being absent for about eight third quarter minutes following a dangerous - but not intentional - challenge by an opponent.

Dunshaughlin went scoreless from the 42nd minute until McDonagh wrapped up the scoring in the second minute of added time at the end of the game.

Richie Kealy's charges registered no wides over the hour while the visitors had just four. Cooley Kickhams might have had a goal within a minute of the resumption but Brian White's effort was stopped by Dunshaughlin netminder Adam McDermott.

Conor Duke - who started instead of Luke Mitchell - posted a great point in the 38th minute to leave the board reading 0-11 to 0-5 and Dunshaughlin well-placed to advance.

Having been fortunate not to have a player sent off earlier in the half, Cooley Kickhams lost sub Conor McGuinness to a straight red card in the 52nd minute.

On a calm overcast afternoon, Cooley were first to show through Brian White's fourth minute mark, loudly cheered by the strong Cooley Kickhams' support. Dunshaughlin response was four points in a five-minute spell.

Two Mathew Costello efforts from play were the centre pieces to that scoring burst. Richie Kealy's men remained in front to the end

Aaron Murphy spurned a ninth minute goal chance for the Meath side. White's accuracy from frees and marks left the Louth men just the minimum in arrears, 0-3 to 0-4, with 18 minutes on the clock.

Dunshaughlin doubled their first-half total in the run up to half-time with John McDonagh bringing his tally to 0-3.

White (free) left just a goal between the teams at the break, 0-5 to 0-8 with the cross breeze seeming to favour neither side.

The aforementioned five third quarter scores secured Dunshaughlin's provincial final ticket. Much remains to be done between now and then if the amber and blacks are to build on Meath's strong reputation in this competition.