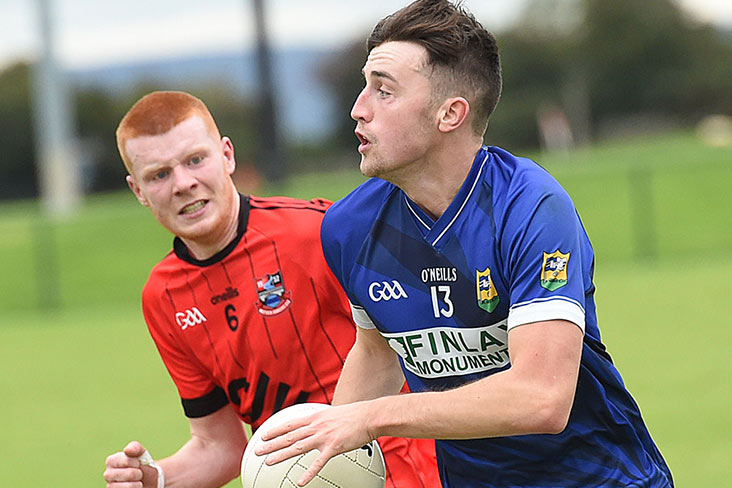 St Marys were the first team in the draw for the Senior Championship semi-finals after defeating a spirited St Brides by 5-9 to 1-13 at Stabannon on Sunday afternoon.

In what proved to be a very entertaining to start Sunday’s quarter-finals, it was the Ardee side’s eye for goal that proved decisive but it was only in the closing stages that they managed to settle the issue.

It looked like it was going to be a comfortable afternoon for the Marys as they got off to a blistering start with points from Luke Matthews and Ciaran Keenan being followed by a Carl Gillespie goal on seven minutes.

Bernard Laverty got the Brides off the mark before Ciaran Deane got through for a goal to cut the gap to one. Both sides continued to show great attacking intent but it was goals from Matthews and Gillespie that saw St Marys lead by 3-3 to 1-5 at the break.

Conor Gillespie, Ronan Carroll and Daire McConnon were on target as the Ardee side maintained their advantage, but at the other end Paddy Reilly, Kevin Hearty and Emmet Kirk kept the pressure on to leave the gap at just 3-7 to 1-10 with seven minutes to play.

However, it was St Marys who struck the decisive blow when Carroll got in for a fourth goal before Ryan Rooney settled things with another three-pointer in injury-time.

Two goals in the closing stages of the first half proved the difference as Newtown Blues edged out Dreadnots at The Grove on Sunday afternoon.

Robert Carr and John Kermode accounted for the crucial scores as the Drogheda side made it through to the semi-finals on a 2-9 to 0-12 scoreline.

It was the Clogherhead side who made the brighter start with points from Pepe Smith and Derek Shevlin before Ciaran Downey hit back with two for the Blues.

The sides shared the next four points before Carr found the net on 24 minutes and just before the break Kermode added the second to put his side in the driving seat with a 2-6 to 0-5 lead.

The second half saw the Clogher side continue to push forward with Jay Hughes and Darragh Shevlin finding the target. However, Ross Nally also had his eye in at the other end to keep the Blues in control.

The Dreadnots battled to the end but they couldn’t conjure up the goal they needed and although Padraig Rath cut the gap to three late on, it was too late to save the game and the Drogheda men advanced.

Naomh Mairtin showed once again that they are not going to give up the Joe Ward without a fight as another fine performance saw them ease past St Josephs and into the last four of the Senior Championship.

The Monasterbocie side bossed this game from the opening whistle and the outcome was never in any real doubt as they ran out winners by 4-15 to 1-5.

Val Leddy (2), Conor Whelan, and Sam Mulroy all found the back of the net against a Joes side who just couldn’t get a foothold in the match.

The pattern of the game was established early on as Mulroy (2), Stephen Campbell and John Clutterbuck had points on the board before the water break.

JP Rooney and Conor Whelan got in on the act before the break as the lead was extended to 0-10 to no score.

Although the Joes did finally get off the mark in the second half, it didn’t get any better for them as the Mairtins found their goal-scoring touch. Conor Whelan scored the first on 35 minutes before Leddy added two inside a minute at the end of the third quarter.

Mulroy completed the job in injury time while the Joes did get a consolation goal before the end from Oisin McGuinness.

St Mochtas made it into the last four when they came through a thrilling encounter with Mattock Rangers at Darver on Sunday evening.

A dramatic encounter finished level at 1-13 to 0-16 before the Louth Village side proved the stronger in extra-time before claiming a 1-22 to 1-17 victory.

In a game of twists and turns, it looked as if Mattock were heading for victory when scores from Shane Hickey and Cathal Fleming had their side two points ahead with five minutes to play, only for Declan Byrne, Ciaran Byrne and Darren McMahon to put the Louth Village men in front in injury time. However, Fleming landed the equaliser in the dying seconds to bring the game to extra-time.

Mochtas showed great character to overcome their disappointment as they made the decisive move six minutes into in to extra time when Cormac Smyth found the net to give his side a 1-20 to 1-16 advantage at the break.

The Louth Village men maintained control from that stage and completed the win with points from Declan and Ciaran Byrne.

The winners had the better of the game in the opening half and with the elements behind them they scored the opening six points inside the first quarter. Mattock gave themselves hope with the first goal of the game from Ryan Leneghan to trail by 0-11 to 1-2 at the break.

The Collon side gradually clawed back the lead and snatched a draw through Fleming but were unable to maintain the effort in extra-time as the Mochtas made it through.