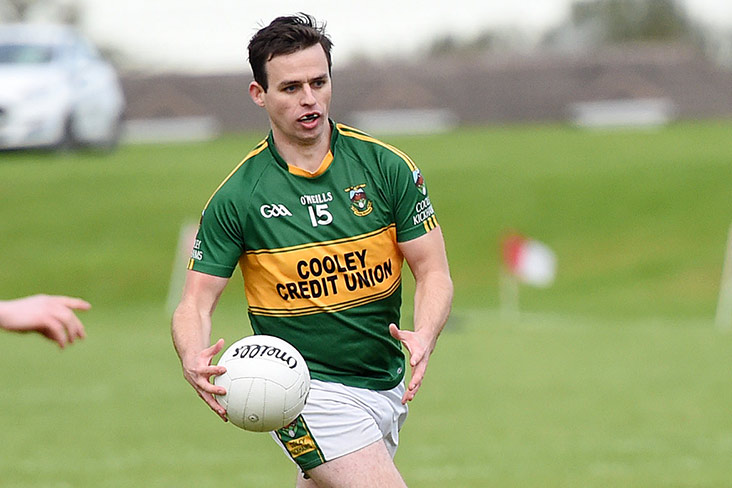 Cooley Kickhams made it through to the last eight at the expense of O Raghallaighs when they came through a high-scoring encounter at Dunleer on Saturday evening.

Substitute, Michael Rafferty was the scoring hero for the peninsula side as he grabbed both of his side’s goals in the 2-20 to 4-10 victory.

In a game where Ferghal Malone and Patrick Johnston were also prominent among the scores, Cooley went into the break with a 0-9 to 0-8 advantage, as Kyle McElroy and Ben Rogan responded for the Drogheda side.

The game really came to life in a second half that produced six goals. McElroy (2), Ben Rogan and Ruairi Moore all found the net for the O Raghallaighs, but it wasn’t enough to deny Cooley who saw Rafferty bag two vital goals.

The result means that the O Raghallaighs mush now face into the relegation play-offs, while Cooley look forward to the quarter-finals.

League form was turned on its head in Group B as St Kevins turned on the style to defeat Clan na Gael by 2-14 to 0-13 at Stabannon on Saturday evening.

With some good performances in Division 2 behind them, the Dundalk side went into the game as favourites to advance against a Kevins side that had managed just one win this season. However, under the guidance of manager Niall Callan, the Philipstown side found their rhythm when it mattered most and ran out deserving winners to leave the Clans facing the relegation play-offs.

Lee Crosbie scored the opening goal of the game but an excellent first half showing was summed up by a brilliant goal from Darren McMullan just before the interval. The full back started and finished a sweeping move involving ten players before finding the back of the net to put his side 2-9 to 0-5 ahead at the interval.

The Clans battled to get back into the game in the second half with points from Billy Smith,  Robbie Curran and Mark McGeown. Although they did manage to cut the gap they were unable to find the goals they needed to threaten a comeback and points from Patrick Clarke and Shane Meade helped St Kevins hold out for victory.

Sean O’Mahonys also booked their place in knock-out stages when they overcame Roche Emmets by 2-11 to 0-9 at Haggardstown on Saturday night.

The Dundalk side’s greater experience proved vital as they always had the slight edge throughout this encounter with two second goals from Stephen Kilcoyne and Terry Kelly proving crucial to send Roche into the relegation play-offs.

Kilcoyne and Conor Finnegan were on target for the O’Mahonys as they went in at the break leading by 0-7 to 0-4 with Barry O’Hare kicking all four for Roche.

The Faughart side continued to battle in the second half with Glen Stewart and Peter Lynch on target but they had no answer to goals from Kilcoyne and Kelly as the Sean O’Mahonys advanced to the last eight.

Kilkerley Emmets put their name in the hat for the quarter-final draw thanks to a 1-18 to 2-9 win over Nh Fionnbarra at Darver on Saturday afternoon as they finished top of Group D.

The Barrs began well put up three points from O'Reilly and McCreesh but 1-2 from McEnaney including a penalty along with points from Fegan and Quigley had Emmets ahead 1-4 to 0-3 at the first water break.

Quigley was again on target for Emmets along with three from McEnaney while Butterly, Osborne and Marry replied to leave it 1-8 to 0-6 for Kilkerley.

Brian Brady, Murtagh, McEnaney and McKeown pointed but McCreesh with two, and a goal from an O'Reilly a penalty tied the game up at 1-12 to 2-9.

However, the Barrs failed to add to their score as Kilkerley dominated the closing stages with points from Fintan Brady, Quigley, and McEnaney left a margin of six in it at the end.