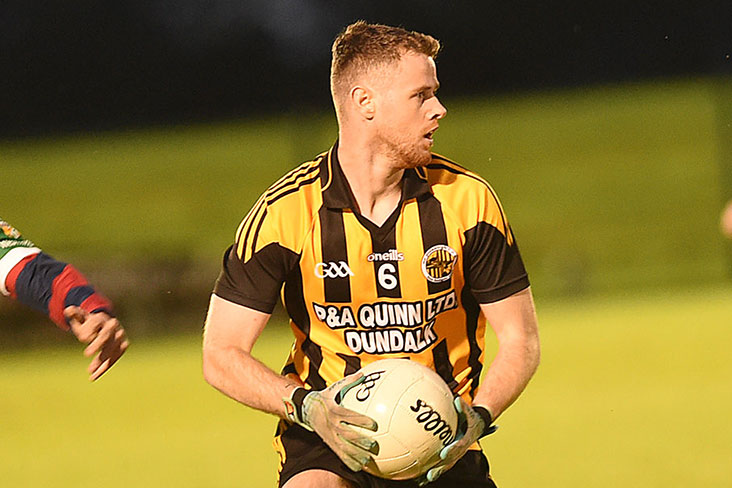 Na Piarsaigh finished top of Group D of the Junior Championship after scoring a comfortable 3-16 to 0-6 win over Cuchullain Gaels at Darver on Friday night.

The Dundalk men were already through to the quarter-final alongside their Omeath counterparts who created history on Monday night by defeating Sean McDermotts to make the knock-out stages for the first time.

The first half of the contest was relatively evenly contested but Na Piarsaigh struck the first major blow when David Boyle fisted in the opening goal to give his side a 1-6 to 0-4 lead at the break.

The second period saw the Dundalk side pull away as goals from Eamon McAuley and Conall Shields sealed victory. Among the scorers for Gaels were Rammie Phillips, Martin Hynes and JP Elmore.

Also in Group D, the two sides already out of the championship, Dowdallshill and Sean McDermotts came face-to-face, with the Dundalk side coming out on top by 4-16 to 0-13.

A depleted Seans side were no match on a night when Dowdallshill went into the break leading by 2-6 to 0-9 thanks go goals from Niall McManus and Cathal Sheridan.

The same players added goals in the second half while Stephen Cooney took his tally to six points to stretch the advantage to 15 points at the final whistle. Tony Kelly top-scored for the Seans with four points, while Kevin McMahon, Danny Commins and Peter Osborne were also on target.

Glen Emmets finished top of Group C after edging out Lannleire by 0-11 to 0-10 in a tight contest at the Gaelic Grounds on Sunday afternoon.

The meeting of two of the Junior Championship favourites finished with the Tullyallen men just edging it over Lannleire, meaning Glen Emmets top Group C ahead of the Dunleer men.

In a closely fought game all through, it was Glen Emmets who led at the interval 0-5 to 0-4, with Conor Grimes, Ronan Grufferty and Eoghan Maguire on target, while Lannleire's first half came from Caoimhin Maher, Killian Gregory, Colin Murphy and Jack Maguire.

At the end of the second water break, Emmets still led 0-8 to 0-7 and the gap remained the same at the end with Kealan O’Neill landing two crucial points.

The Dunleer side almost snatched victory but Killian Gregory’s shot came back off the crossbar.

Meanwhile Annaghminnon Rovers finished their Group C campaign with a 3-5 to 1-8 win over Wolfe Tones at Darver on Sunday afternoon.

Both sides were already out of contention for a place in the knock-out stages and that was obvious in a rather uneventful first half that ended level at three points apiece.

It was Annaghminnon who raised their game in the second half and goals from Richie Ashfield, Dwayne Markey and Eddie Finnegan were enough to give them victory despite Niall Smith pulling a goal back for the Tones.