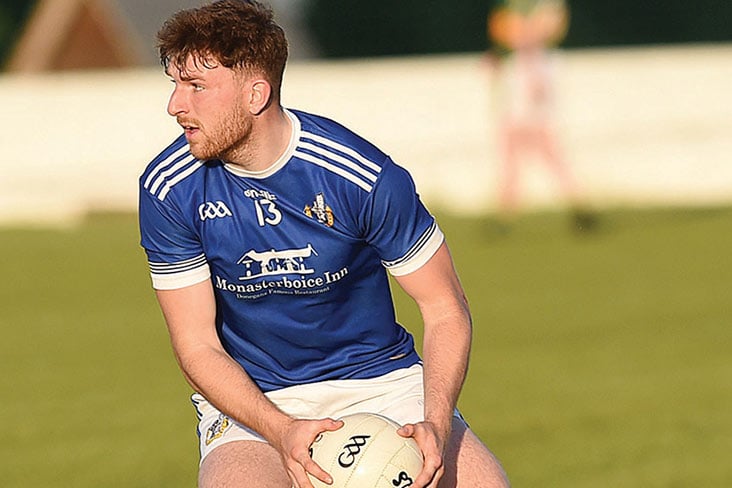 Carl Gillespie was the hero for St Marys for a second successive week as his late score clinched a 16 points apiece draw with St Patricks at St Brigid’s Park on Sunday afternoon.

The outcome of a highly entertaining Group A encounter means that the Ardee men will advance to the quarter-final with St Pats and St Mochtas to fight it out for the remaining place.

When the sides met at the beginning of the month in the league, St Marys emerged with a 20-point victory and were strongly fancied to come through this test unscathed.

It appeared that they were on course for victory when the established a 0-6 to 0-2 lead at the end of the first quarter, and by the interval that was stretched to 0-12 to 0-7.

However, the Pats were in no mood to throw the towel in and points from Jack Murphy, Cathal Grogan and Martin McEneaney helped them get back on level terms at 0-14 apiece with five minutes remaining.

Points from Danny O’Connor and Paddy Keenan looked to have won it for the Pats, but the Marys showed great character to hit back with a Darren Clarke point before Gillespie fired over the equaliser three minutes into injury time.

Newtown Blues are also into the quarter-finals after recording a 5-6 to 2-11 success over St Josephs at The Grove on Sunday afternoon.

The game was similar in many ways to the Blues first outing against Dundalk Gaels in that once again they were made to fight all the way but were always able to produce the scores any time they looked threatened.

In an all-action first half, the Blues found the net three times through Emmet Carolan, Ross Nally and Rob Carr. However, the Joes were also in good form in front of the posts and a goal from Jack Mulligan saw them cut the gap to 3-3 to 1-4 at the break.

The Joes continued to push forward in the second half and remained in the game until Nally added his second and Conor Braningan also found the net.

Alan Lynch hit back with another goal for the Joes to set up a tense finish but the Blues held out to advance to the knock-out stages.

The Joes will face Dundalk Gaels in the final group game to decide who will finish runners-up in the group.

Defending champions, Nh Mairtin, began their Group D campaign with a victory over Dreadnots but it was far from straightforward for the Monasterboice side.

After a slow start, the Jocks found themselves trailing by three points at the break before they raised their game and ran out winners by 1-11 to 0-9.

Fresh from their win over Geraldines on the opening weekend, the Dreadnots continued that momentum with an impressive opening spell as points from Peter Kirwan, Jay Hughes and James Califf helped the Clogher side to a 0-7 to 0-4 advantage at the break.

The Mairtins appeared to be in trouble at that stage but they turned the game on its head with a brilliant third quarter display. Not surprisingly it was Sam Mulroy who provided the inspiration as he scored the only goal of the game on 34 minutes, while points from Conor Whelan and Wayne Campbell saw them lead by 1-9 to 0-7 at the water break.

The Dreadnots never recovered from that blitz and managed only two second half points, while Mulroy finished with an impressive tally of 1-7.

Mattock Rangers are also through to the quarter-finals after defeating St Brides by 0-18 to 1-10 to top Group C.

The Collon side based their victory on a blistering start to the game, inspired by the accuracy of Cathal Fleming who finished the game with seven points to his credit.

Although it was the Brides who opened the scoring, it was all Mattock for the remainder of the first half as they went in at the break with a lead of 0-8 to 0-1.

A further four points were added before the Knockbridge side kicked their second point and soon after they added the only goal of the game. Although they cut the gap to five points by the final whistle, Mattock had already done enough to record the second win on a night when Aaron O’Brien, Shane Hickey and Ben Watters were also among the scores.