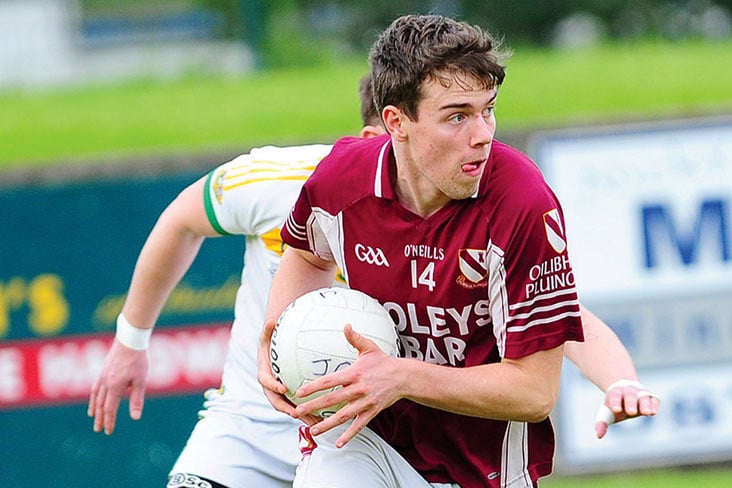 St Fechins booked their place in the quarter-finals of the Intermediate Championship after a 1-9 to 0-8 win over Sean O’Mahonys at Haggardstown on Friday night.

The Termonfeckin side were comprehensive winners over Roche Emmets in their opening round but found it a much greater challenge against the O’Mahonys and required a late goal from Eoghan Duffy to secure the win.

The first period proved to be a cagey affair with Stephen Kilcoyne and Terry Kelly on target for the Dundalk men. However, the Fechins were more efficient at the other and went in at half time with a 0-6 to 0-4 lead.

The Fechins edged four clear in the third quarter only for three Conor Finnegan frees  to reduce the gap to one. However, they were unable to complete the comeback as Duffy’s late goal secured the victory.

Oliver Plunketts secured their place in the knock-out stages after running out 0-13 to 0-9 winners over Nh FIonnbarra in Group D on Saturday afternoon in Group D.

Cian Brady and Conor Early were the scoring heroes as they landed five points apiece to help hold off the determined challenge of the Ballygassan side.

Boosted by their opening round draw with Kilkerley, the Plunketts had the slight edge in the opening quarter as they established a two-point lead.

They continued to find their range in the second quarter but the Barrs kept in touch and scores from Thomas McCreesh, Michael McArdle and Padraig Butterly helped them cut the gap to just 0-7 to 0-5 at the break.

The Plunketts had the edge in the second half but the FInbarrs were always in contention and it took a fine save from Luke Haggins to deny Calum Regan a goal that might have changed the game. However, in the end the Plunketts held out to advance to the last eight.

Dundalk Young Irelands clinched top spot in Group B when they were 2-12 to 1-8 winners over Clan na Gael at St Brigid’s Park on Sunday evening.

There wasn’t much to choose between the teams in the opening half with Cathal Ferriter on target for the Irelanders, while Shane Carroll and Paul Crewe replied to keep the Clans in the game.

However, the Young Irelands struck the first major blow in first half injury time when Peter McStravick found the net to send his team in with a 1-5 to 0-3 advantage.

The second half saw the Young Irelands remain in control without being able to kill the game off until Dean Maguire produced the second goal on the 60 minute mark. There was still time for Conal McKeever to score a consolation goal for the Clans but it was too late to save the game.

Hunterstown Rovers will be in the hat for the quarter-finals after they came from behind to defeat O Raghallaighs on a scoreline of 2-14 to 1-12 at Dunleer on Saturday afternoon.

Rovers went into the game on the back of victory over Cooley the previous week, but they made a slow start as O Raghallaighs went 0-3 to 0-1 up.

A goal from James Ward got the Mid Louth side back into contention but John Horan raised the green flag at the other end to send the O Raghallaighs in at the break with a 1-8 to 1-6 lead.

Hunterstown picked up the pace in the second half with Ryan Burns again in fine form as he finished with nine points. Brother, Dean, also made a vital contribution once again as he added the second goal to seal the win.

Kyle McElroy and Ruairi Moore both finished with five points for the O Raghallaighs.