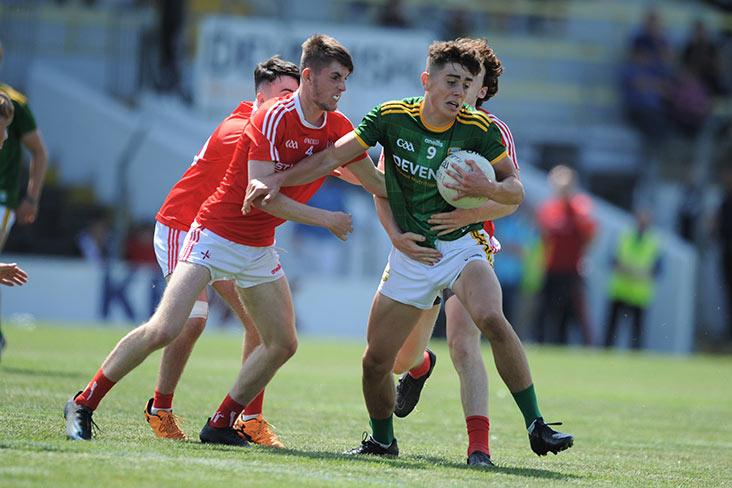 Second-best for most of the opening half, Meath asserted themselves thereafter to overcome Louth in an engrossing clash at Pairc Tailteann early on Saturday afternoon. To view photos click here

Meath outscored Louth by 1-8 to 0-5 after the break despite playing against a stiff easterly breeze. Hughie Corcoran was Meath's scoring hero, taking the scoring plaudits with seven points.

Having been 0-7 to 1-6 in arrears at half-time, Meath regained the lead by 37th minute when full-forward Oisin O Murchu netted at the town goal leaving the scoreboard reading 1-9 to 1-8.

Meath took the lead to the end to secure a provincial final meeting with Dublin, set to take place on the August Bank Holiday Monday.

Conditions were cooler than during the week, but Meath had the wherewithal not to be deterred by a number of misplaced passes.

Liam Flynn's 44th minute free left Louth just one point off the pace, 1-9 to 1-10. Cathal O'Bric's side responded with six consecutive points to begin the defence of the title won a little over three weeks ago.

Wins over Westmeath and Laois secured this meeting of neighbours with the underdogs making a strong impression in the first-half.

Dara McDonnell and James Rogers provided the midfield platform for Aaron Hoey's side. They responded well to Andrew Moore's opening score for Meath.

A Corcoran point had Meath back in fron by the 16th minute. Fionn Cumiskey's goal, assisted by Kieran McArdle, roused the Louth support.

Jack Kinlough pulled a point back for Meath who trailed by 0-4 to 1-2 at the first water break. Two fine Corcoran points kept Meath in touch in the second quarter.

The side were level once more, but late points from Liam Flynn (free) and Kieran McArdle (45) gave Louth a 1-6 to 0-7 interval advantage.

Meath upped their game from the resumption. Sub Rian McConnell chipped in with two points. By the end seven players had scored for the home side.

They lost their goalscorer in stoppage time at the end of the game. Pointed frees from Flynn and Sean Reynolds wrapped up the scoring and softened the final scoreline for Louth.