Meath and Dublin to meet in Leinster MFC final 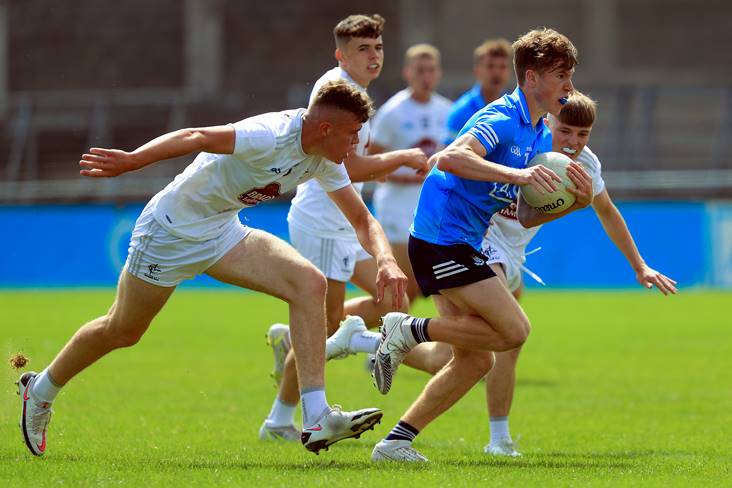 Dublin's Mark McNally on the move against Kildare. ©INPHO/Evan Treacy.

Reigning champions Meath and near rivals Dublin booked their places in the Leinster MFC final on the August Bank Holiday after their respective wins over Louth and Kildare this afternoon.

Making their 2021 championship bow under new manager Cathal O Bric with only a handful of last year's winning side, Meath beat the Wee County by 1-15 to 1-11 at Pairc Tailteann.

Hughie Corcoran was the standout performer for the Royals, contributing 0-7, five from play.

Aaron Hoey's Louth had led 1-6 to 0-8 at the end of a closely contested first-half, thanks to Fionn Cumiskey's goal just before the water-break.

But Oisín Ó'Murchú's major six minutes after the restart turned the tide in favour of O'Bric's charges, as they outscored the visitors by 0-6 to 0-3 from there.

Dublin overcame the concession of goals in both halves to edge Kildare on a 0-13 to 2-5 scoreline at Parnell Park.

The only scorer in the opening 22 minutes, Tadhg Gorman pointed the Dubs into a 0-4 to 0-0 lead at the first water-break.

Fionn Cooke's goal brought Kildare back into contention by half-time, 0-5 to 1-1.