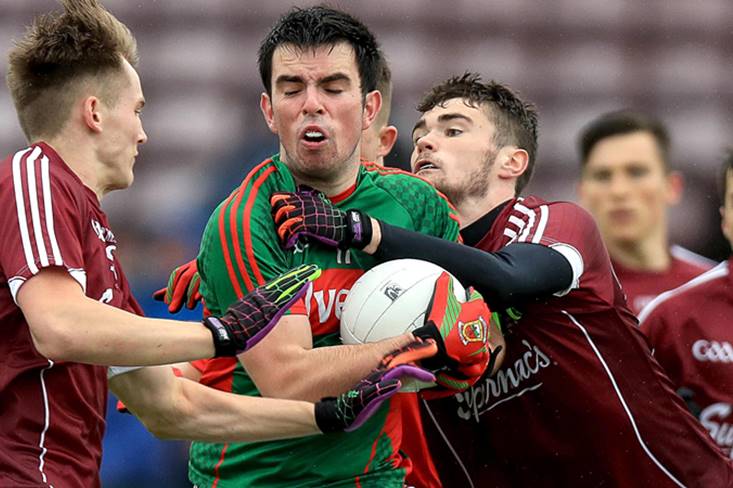 Mayo's Ross Egan on minor championship duty against Galway in 2016

Mayo booked their place in the Connacht U20FC final following a 21-point drubbing of Leitrim at Elvery's MacHale Park today.

Both teams finished with 14 players after Sean Harkin (Leitrim) and Oisin McLaughlin (Mayo) were dismissed in the second half. Harkin received a straight red card in the 36th minute, while goal-scorer McLaughlin was sent off on a second yellow 12 minutes later, meaning he will be eligible to line out against either Galway or Roscommon in next Sunday's provincial decider.

Full forward Ross Egan scored 0-12 (0-6 from frees) as Mike Solan's charges romped to the easiest of wins against a Leitrim side which failed to score a point from play. Jordan Reynolds netted in the 11th minute for the Joe Cox-managed visitors, but the result was never in doubt after McLaughlin's 18th minute major propelled Mayo into a 1-6 to 1-0 lead.

Further scores from Egan, Ryan O'Donoghue, McLaughlin and Cathal Horan left the hosts perched on a 1-12 to 1-1 lead at the break.

It continued to be one-way traffic after the restart when Conroy, Egan, John Gallagher, Colm Moran, Sean Óg Tigue and goalkeeper Patrick O'Malley ('45) all found the target.

Mayo's winning margin would have been greater had Leitrim 'keeper Darren Maxwell not saved a penalty from Ryan O'Donoghue.