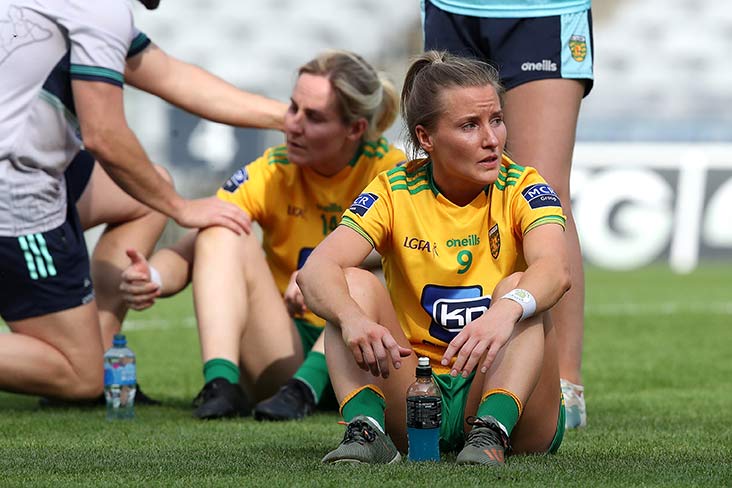 DONEGAL captain Niamh McLaughlin was named as the 2022 TG4 Senior Players’ Player of the Year at the annual All Star banquet, in association with Lidl, at The Bonnington Dublin Hotel on Saturday night.

McLaughlin was a tower of strength for Donegal as the Ulster county contested the 2022 Lidl National League Division 1 Final, a TG4 Ulster Senior Final, and a TG4 All-Ireland Senior Championship semi-final.

The sheer consistency of McLaughlin’s performances around the middle third of the field earned her the nod from her peers, and the Moville player makes history as Donegal’s very first TG4 Senior Players’ Player of the Year award winner.

It was a night to remember on the double for 28-year-old McLaughlin, who also collected her first TG4 All Star award at midfield and as the sole Donegal representative on the 2022 selection.

Duggan collected a second successive TG4 All Star award on the night, as Ní Mhuircheartaigh scooped her third award, and first since 2013.

Mo, from the Timahoe club, was top scorer across all three grades of the 2022 TG4 All-Ireland Championships with a haul of 5-31, including 1-5 in the TG4 All-Ireland Intermediate Final victory over Wexford.

Nerney, who was also nominated for an All Star, landed the Intermediate Players’ Player of the Year award ahead of Laois team-mates Erone Fitzpatrick and Aisling Donoher.

All three players from the O’Moore County were named on the 2022 TG4 Intermediate Team of the Championship, which was announced in September.

And there was some consolation for Fermanagh following their TG4 All-Ireland Junior Championship Final replay defeat to Antrim as forward Bláithín Bogue was named Junior Players’ Player of the Year.

Bogue, from the Tempo Maguires club, landed 2-13 in the TG4 All-Ireland Championship, including seven points from play during the course of an imperious display against Antrim in the drawn Final at Croke Park on July 31.

Bogue was nominated for the Junior award alongside team-mate Eimear Smyth and Antrim skipper Cathy Carey.

All three nominees were named recently on the 2022 TG4 Junior Team of the Championship.

It was also confirmed at the TG4 All Star banquet that the 2022 TG4 All Star Tour will visit Austin, Texas, in the United States next year.