'The recovery was long and hard, it wasn't an instantaneous get up and go' 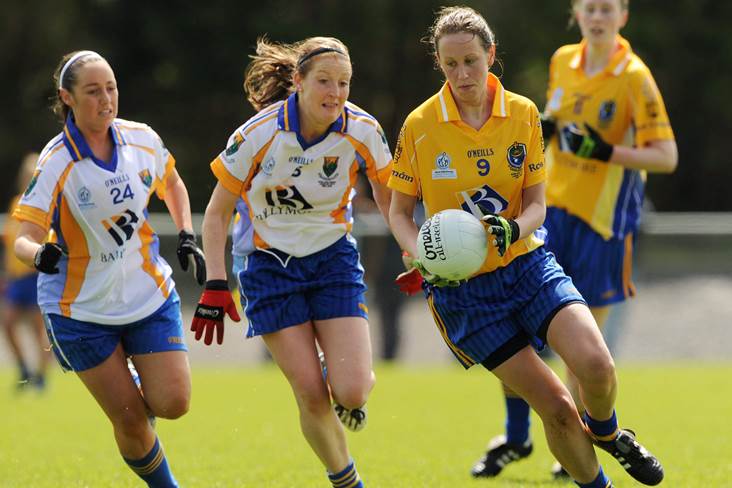 9 May 2009: In her final game for Roscommon before her ten-year lay-off, Caroline Conway is in action against Lisa Brady (5), and Eadaoine Lenihan of Wicklow during the Bord Gais Energy Ladies NFL Division 3 Final at St Bridget's GAA Club, Kiltoom, Co Roscommon in 2009. Picture credit: Ray McManus / SPORTSFILE

Caroline Conway’s 3,914 days of Roscommon exile ended last month and now she hopes to line out in her native county’s midfield for the third time in as many weeks.

Roscommon are flying high at the summit in Division 3 of the Lidl NFL after back-to-back victories while they go to Fermanagh on Sunday in their Round 3 tie hoping to maintain their perfect start.

And the reigning Connacht intermediate champions have been boosted by the return of a 35-year-old veteran.

Before her return Conway’s most recent Roscommon appearance came on 9 May 2009, when she kicked a point that helped her side to the Division 3 crown with victory over Wicklow in Kiltoom.

Since then she’s played for Dublin, Ballyboden St Enda’s and Ballyboden Wanderers. She also took part in various adventure races and ended up cycling and competing in duathlons for Ireland, but a serious back injury then threatened everything.

Conway ended up having to go under the knife in July 2016, and now her stunning comeback is complete.

“It just makes you appreciate movement more,” she said. “The recovery was long and hard, it wasn’t an instantaneous get up and go.

“It was July and we had a particularly good summer that year. I was confined for a few weeks to lifting nothing, not being able to drive for three weeks.

“Walking, building up to 100 metres. It was crazy stuff.”

Having grown up in the small rural village of Tulsk in Co. Roscommon, Conway made her county debut in 2001, the same year they went all the way to triumph in an All-Ireland junior decider.

Success came thick and fast; she was part of a UCD O’Connor Cup triumph and won a provincial title with her club, St Mary’s. In 2005, Roscommon were crowned intermediate All-Ireland champions and she bookended the first part of inter-county career with a league title four years later.

She had moved to Dublin in 2006 and represented her new county the following year, after linking up with Ballyboden St Enda’s on her arrival.

The club were successful both in their home championship and provincially too, and while she went back playing with Roscommon she eventually called time on that in 2009.

Her club career continued but she began to look for new ways to stay fit, and took up long-distance running. She bought a bicycle as part of the Bike to Work scheme, and her competitive streak soon introduced her to the world of elite cycling.

Conway cycled in the Irish development squad in 2011 and went on to compete in duathlons for her country too. She was ranked third in Europe in 2013.

But a freak accident in March of that year would have lasting repercussions. Conway was hit by a van and it caused a back injury that ultimately put paid to her running and cycling. By 2016, she was even struggling to sit down at work.

“I went from not being able to put on socks or shoes, or get into the car and sit down at a desk job for a couple of months before the surgery,” said Conway.

Conway had continued to exercise after her injury but the wear and tear eventually wreaked havoc on her lifestyle.

“I had tried chiropractors and physiotherapy. I went to pretty exhaustive measures to try and get it back and not go the surgery route,” she added.

“I had the cortisone injection in May before the surgery and that didn’t settle it either.”

She was suffering from a slipped disc and Dr Nagaria in the Beacon Hospital, Sandyford, provided some light at the end of the tunnel.

“When I was gone in for the surgery I was told that I was going to be back running in six weeks,” said Conway.

“My eyes lit up, brilliant just do the surgery, but it didn’t pan out like that. The recovery was a little more complicated.”

Conway got back on her feet eventually and the months of rehab eventually paid dividends when she became mobile again.

She was ready for something more physical and in 2017 a friend at Ballyboden Wanderers asked her would she tog out.

“I was hesitant at the time, I said I would go up and play the challenge match and you never know I might enjoy it,” said Conway.

“They even bought me a pair of boots so I would play.”

The small Rathfarnham club provided an outlet for Conway to get back playing football. And once again the success flowed.

They were in the lower divisions of junior football in the county but after a couple of successful years they were winning county titles and Conway was picked on the Junior Dubs Stars.

Roscommon manager Michael Finneran came calling and in January 2020 Conway was back in her county panel.

“When Mike asked me would I come back playing this year, you have the conflicting shoulders,” said Conway.

“In one ear you are going ‘just because I can doesn’t mean I should’. Then on the other shoulder you are hearing people saying ‘long enough you will be standing looking out at people playing’.

“You definitely should give it a go while you still can.”