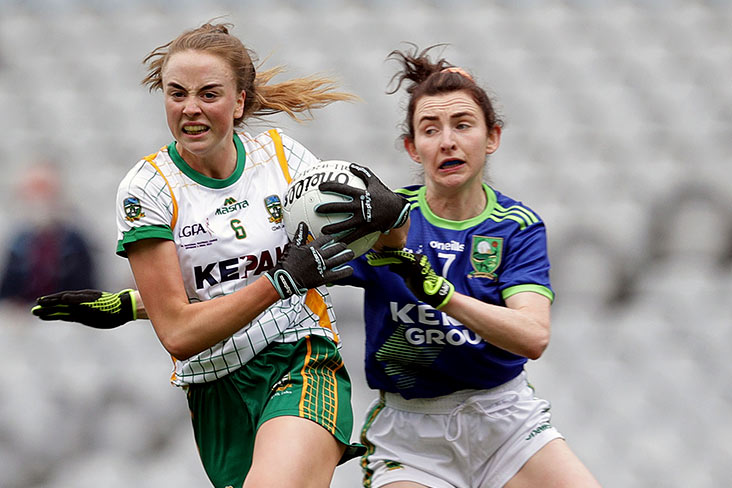 The LGFA Interfirms Blitz competition returns today (SAT) and with PWC entering three teams, Meath star Aoibhín Cleary will be one of their aces in the pack.

There will be plenty of talent showcased in Abbotstown but not many will come with the same mindset that the current two-time TG4 All-Ireland Senior Championship winner will bring.

Cleary is a born winner and the last five years have brought her from the lowest lows to the highest of highs with the Royals.

And while Meath undertake their own period transition next year, players like Cleary will be tasked with steering the ship and maintaining the direct route back to the Brendan Martin Cup.

“It will definitely be different, that’s for sure,” admitted Cleary.

The 23-year-old Donaghmore-Ashbourne defender has been a central figure as Eamonn Murray’s side took over from Dublin at the summit of Ladies football.

But now Murray has gone, as has coach Paul Garrigan, while the reigning TG4 Senior Players’ Player of the Year Vikki Wall has also left for the time being, along with Orlagh Lally.

The trophy cabinet still glistens with two TG4 All-Ireland Senior Championships, one TG4 All-Ireland Intermediate Championship and Lidl NFL Division 1, 2, and 3 crowns but Meath need to find a way to fill a few seismic gaps and Cleary cannot wait to take the challenge head on.

“We have been lucky for the last few years, we have had a really consistent team and set-up,” said Cleary.

“But I guess there always comes a time when things need to change. That’s this year, I guess, for us. It will definitely be different and it will be interesting. But I have no doubt that we will continue on this upward trajectory for the minute.

“We will miss the lads, anyone who has been involved, Michelle Grimes as well. And then the girls who are gone now, travelling or over to AFL, they will definitely be missed.

“Their presence more than anything, they are people that are really good friends to us and we have learned so much from each other over the last few years.

“It will be different but it will be interesting and it’s still exciting. It’s a huge challenge but we are really excited for it.”

Meath received a huge boost this week when it was announced that Davy Nelson take over as team manager ahead of the 2023 campaign. The former Meath men’s U-21 manager brings with him a great CV and Cleary and her teammates are excited to work alongside him.

“It’s great to have Davy in now with his backroom team,” said Cleary.

“I’ve heard great things about him. He obviously has great experience and a great record.

“It’s really sad to see the others go. We had an incredible few years together and we’ll never be able to thank them enough; Eamonn, and Paul, Shane, and Eugene, and all the lads, and Michelle Grimes, for what they have done, in the last few years.

“But it’s exciting to have some new faces in and we are really looking forward to the challenge.”

Cleary has scaled the heights with her club in recent years too, while she also played top tier football in college, where she was part of a strong DCU outfit.

They boasted the likes of Aishling Moloney, Sarah Rowe, Aishling Sheridan, and Leah Caffrey – and they combined to win the HEC O’Connor Cup in 2018.

That was Cleary’s first year of an undergraduate degree, where she studied accounting, while she followed that up with a Masters in Accounting at DCU.

Another O’Connor Cup weekend was cut short due to the Covid-19 outbreak, when a trip to Tralee was cancelled at the expense of more potential glory with DCU. But Cleary went on to graduate and work with PWC.

“I’m only here a year now. I have one set of my professional exams done so I have two more to go. I am training contract for three years,” said Cleary.

“I find the tax side of things interesting. It’s good work. For the time of the year when the exams are on at the same time, it is tough enough, there is a lot going on.

“That would have been around April this year. We were working for a while, then I had a bit of study leave. Then my exams started the day after we played the league final. It was a bit of a hectic week but it was grand. I got a break from studying now and I will start again in a few weeks.”

Meath accomplished plenty since April as well, when they captured the Lidl National Football League Division 1 title after a narrow 2-8 to 1-9 victory over Donegal.

There were a few close calls in the TG4 All-Ireland Senior Championship too, but the Royals regrouped to secure an impressive final win against Kerry – it finished 3-10 to 1-7 in their favour at Croke Park on 31 July.

The team also received an incredible 13 TG4 All-Star award nominees this week, and Cleary could be in line to pick up her second award at the gala banquet in The Bonnington Dublin Hotel on 19 November.

It would cap another outstanding season for the young starlet as her career continues to go from strength-to-strength.

And as she prepares for the Interfirms games this weekend, she has a winner’s mindset now. One that could make PWC the team to beat in Abbotstown.

“It's definitely something we have been really lucky with in Meath, particularly in the last year or two we have had a lot more good days than bad days,” said Cleary.

“So then when you do have the bad days they affect you a lot more. It gets to a stage where you hate losing. I’m sure everyone does anyway.

“We’ve obviously been really lucky with county and stuff but then when I go back to my club this year we weren’t all that successful so I have definitely been on both sides of it in the last few months.

“But every time you go out to play now you definitely want to win no matter what team it’s with.”