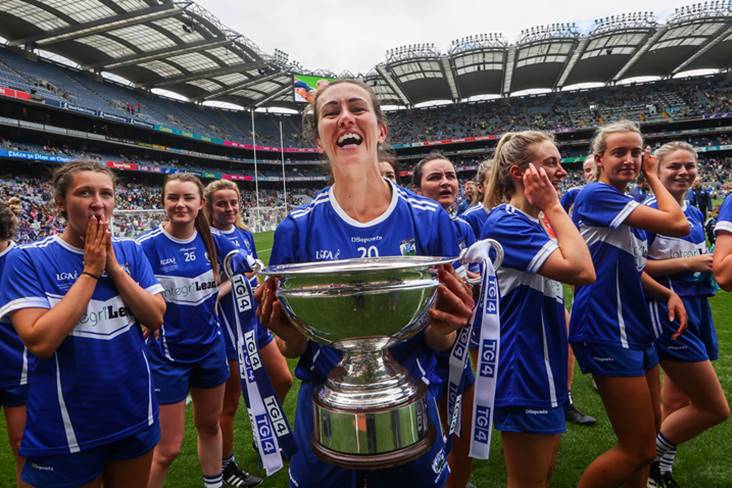 Laois manager Donie Brennan hailed the performance of his defence as the O’Moore County claimed their first TG4 All-Ireland Intermediate Championship in over two decades at Croke Park.

Laois last lifted the Mary Quinn Memorial Cup in 2000, one year before they beat Mayo in the senior decider. And they will return to the top tier again in 2023 after this win over Wexford.

Mo Nerney scored 1-5 for Brennan’s side but it was the resolute defending that kept Wexford at bay until late in the game, when Catriona Murray finally found the net for a consolation.

“If you listen to all the so-called experts and reports, there was a lot of criticism towards our backs and we had magical forwards who were able to put up big scores,” said Brennan.

“Our full-back line; absolutely outstanding. They won every 50/50 ball, every 60/40 ball against them. They laid the foundations for the forwards to do their job.

“We are old-fashioned in the way we like to play, maybe a nine or ten-point lead, didn’t matter. I suppose the girls were a bit nervous. We were dominating the game; we just weren’t converting our chances.

“Even coming in at half-time, we just wanted to go out in the second half and to win the match by 17 or 18, if we were able to.

“Wexford hung in there, they got a goal near the end. This Laois team, since I’ve been involved, we win the hard way.”

Wexford had suffered a 4-19 to 0-6 defeat to Westmeath in last year’s final but returned on the back of some impressive displays including a semi-final win over Roscommon.

Laois had got the better of Clare after extra-time in the final four and they raced into an early 0-2 to 0-0 lead after points from Eva Galvin and Laura Marie Maher.

Wexford remained competitive until Nerney brought her personal tally to 1-2 with Laois’ goal. They were 1-4 to 0-2 in front and remained in the ascendency for the rest of the half. Laois hit five points in a row and took a 1-9 to 0-3 lead into the break.

Erone Fitzpatrick scored on the resumption too but Wexford gradually worked their way into the game, and by the time Aisling Murphy and Kellie Kearney combined they were just 1-12 to 0-9 in arrears.

Wexford had scored goals for fun coming into this and with two minutes remaining Murray finally buried one. But Wexford could only manage a Murray point from a free as they lost another final.

“We didn’t keep the scoreboard ticking over in the first half,” said Wexford manager Lizzy Kent.

“Laois got a good start, we didn’t find our rhythm, get our flow early doors; a few mistimed passes, a few different things.

“We went in at half-time and we didn’t have any intention at that stage of throwing in the towel. We put a bit more of a performance, that we are able to do, in the second half.”