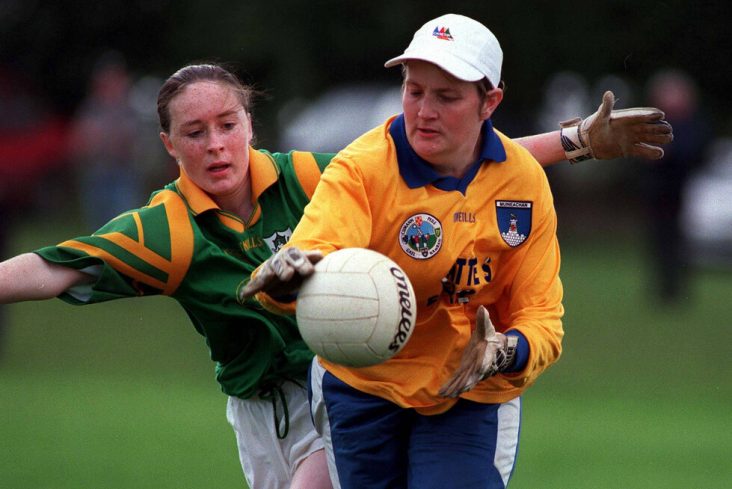 Brenda McAnespie of Monaghan in action against Christine O'Brien of Meath during the Bank of Ireland All-Ireland Senior Ladies Football Championship semi-final at Summerhill GAA in Meath. Photo by David Maher/Sportsfile

Ask Brenda McAnespie a question about football, and almost invariably, family and community is part of the answer.

Ask her a question about family and community, and her response is usually heavily centred around football.

The two topics are so intertwined for the three-time All Star winner that it’s impossible to separate them.

Together, they have been the key ingredients that have been central to the life of the former Monaghan star.

Case in point – tomorrow at Croke Park, when McAnespie will be introduced to the crowd as part of the Jubilee team, the 1997 All-Ireland champions from the Farney County.

That victory over Waterford was their second All-Ireland win, and a particularly memorable one for McAnespie, who lined out at centre back in their 2-15 to 1-16 victory.

“All-Ireland final is a family day in Ladies Football, you’ll have aunts, uncles, loads of people up for the big occasion. Monaghan used to bring a particularly big crowd, there was massive interest all across the county, maybe twenty-something thousand would go up for those games. But because it was in Croke Park, you could still pick out the groups of people that came up to be there for you on the day,” McAnespie recalls.

“I was pregnant for that final and after getting the all-clear from the doctor, I played the game and just told everybody in the dressing room after. Back then, I was one of very few older players on that Monaghan team, and I used to just bring the children to training, and it was just part of the routine. For me, I wanted to play football for Monaghan and I wanted to have a large family, and there was no reason why it had to be one or the other.

“The McNally girls might have been there (a family of sisters from Tyholland that were to go on to feature prominently for the following decade and more) and they would help mind the kids, or our manager Mickey Morgan would get his Mum to look after them. Mickey went on to become godfather for my son Ryan, so that shows you how close you become. “No way would I have been able to do what I did if it wasn’t for the support I got from everyone at that time,” Brenda says.

Given their upbringing, it was no surprise that her family went on to become heavily involved in football, in both the women’s and the men’s games.

All five of her daughters played for Monaghan at some level, with Ciara winning three All Stars in 2009, 2011 and 2016. Her son Ryan was nominated for the GAA equivalent in 2021, while the story of Darren (14) is yet to be written, albeit his future is already destined to be somewhat different, in that it lies with Aghaloo and Tyrone.

Having spent most of her adult career with the Monaghan Harps club, Brenda transferred to Emyvale to play with her daughters, and duly won an All-Ireland intermediate club title in 2008, with Ciara and Aoife both lining out in the forward line that day in Banagher. Football and family, still intertwined.

“They treated me the very same as everyone else,” is how Brenda described the vibe in the dressing room.

“Aoife used to call me ‘Big B’, so there was no question of deferring to their mother or anything like that!”

Ciara’s retirement just before last Christmas drew a line under a 15-year career of her own, and this year proved to be an incredibly difficult one for Monaghan football, culminating in their relegation to the intermediate ranks. Brenda admitted that she knew a difficult year for the county was in store, but that she’s hopeful that a turnaround is coming.

“It was unfortunate, there were maybe 13 or 14 players that stepped away for a variety of reasons, so it left a very young team. It’ll be the first time in 30 years that Monaghan have played intermediate, but there are good young players there.

“I watched our minors play Meath in an incredible minor semi-final a few years ago, winning by a few points, and a lot of those Meath players will play in Croke Park in the senior final. This year’s minors are in an All-Ireland final this week, so there is plenty of hope. It’s a different era now, the commitment required is huge, it’s so much more difficult to do what it takes now, but if you have the right attitude, both Meath and Kerry have shown what can be achieved in a very short space of time.”

While she’s looking forward to tomorrow’s final and the chance to be there in Croke Park for the big day, McAnespie is particularly grateful for the chance to catch up with her playing colleagues from those glory days in the 1990s.

“It’s a very positive idea, we don’t get many opportunities to meet up and I’m really looking forward to it. We’re lucky that we’ll have everyone there from the 1997 panel and management, because you never know what life has around the corner. We have lost one person that passed away from the 1996 group, and you’re always conscious of the uncertainty of what the future holds,” she explains.

For many of McAnespie’s colleagues, it will be a first chance to meet up since she was the subject of a remarkable TG4 ‘Laochra Gael’ episode, which – among other stories – covered her pregnancy during the 1997 final, the killing of her brother-in-law Aidan McAnespie in 1988, her daughter Shauna’s battle with illness, and her work as a county councillor from 1999 to 2009.

The episode was hailed as one of the best of the highly-rated series, and shone a light on aspects of her life that were unknown even to some of those who wore club and county jerseys alongside her for years.

“When I did the programme, I had no idea what to expect, and because of Covid restrictions, the first time I got to see it was the night it aired.

“Normally they have an advance screening for the family, but that wasn’t possible, so we had a large family gathering in the house that night. At the time I’m like anyone else, you hate to listen to your own voice, but they did it really well and it’s lovely to have it. Even the music they chose was so appropriate, it’s a really nice thing to have for your children and grandchildren.

“I wasn’t expecting anything like the reaction it got,” she continued.

“There were women I played with that came up to me and said that they had no idea what was happening in my life while we were playing.

“Most of all, it shows the importance of football in my life, and how helpful it was at different times, particularly when Shauna was sick. People can be a great support to you in the dressing room and there is a great community there in the LGFA and the GAA, and that support is even more important when things aren’t going well, that your community is there behind you to help you through.”

Football and family, family and football. For Brenda McAnespie, they’ve always been connected, and the story of one will always be incomplete without the story of the other.