Kent: "There is a great buzz and great excitement" 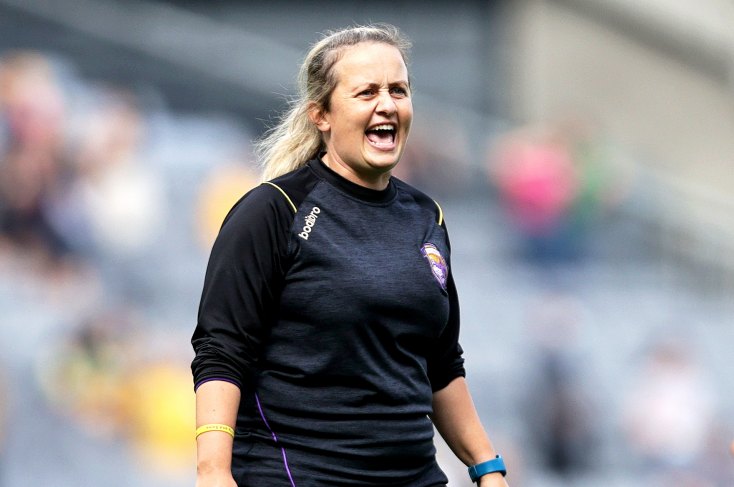 It had been a tough introduction to the managerial hot seat for Lizzy Kent but she never even contemplated giving up.

Now, with the addition of John Nolan as joint-manager, they have guided the Model County back to a TG4 All-Ireland Intermediate Final where they will face Laois next weekend.

It promises to be another massive challenge but Kent relishes the opportunity to get her players back out on the hallowed turf, looking to make amends for that heart-breaking 4-19 to 0-6 loss at the hands of Westmeath.

“It had been such a whirlwind last year,” said Kent.

“We had only just been in less than two months. We had initially said 17 days and let’s try and keep ourselves in intermediate. Credit to the girls, I suppose the run that they went on, the performances that they put in.

“There is no point in dressing it up. It was hugely disappointing last year in the final. But when you were able to sit and reflect on the full season. I was hugely proud of what the girls had done, what they had achieved and where they had come from.

“While the result was hard and the day was challenging, when we looked at the bigger picture, we could be quietly pleased with the progress that we made. That boded well for going into this season.

“I was delighted that I was able to manage and manoeuvre that and have the opportunity to work with this group again. I have been very lucky.”

The Newbawn native took over in the middle of 2021 when Wexford had just suffered relegation to Division 3 of the Lidl National Football League.

For a team who been knocking around the top table in the 1980s their regression was complete and the rebuild began under their new manager.

The progress was instant and Kent brought them all the way to Croke Park before losing to Westmeath.

Nevertheless, Wexford had plenty to build on and they began 2022 full of confidence, looking to escape from Division 3 before turning their attentions back on the intermediate grade.

And they made their way to the league decider only to lose out to Roscommon. It finished 0-9 to 1-5 at St Brendan’s Park in Birr in April – another disappointing defeat in a major final.

“We probably never got out of the blocks in Croke Park last year,” said Kent.

“That was a credit to Westmeath as well. They really came out of the blocks, they were fantastic. They had the experience the previous year as well.

“But for us, the league final it was a nail-biting encounter in the sense it went down to the last few minutes. Both ourselves and Roscommon would have felt neither of us performed to the level we were capable of.

“We were disappointed because we felt we had more in the tank that day. We didn’t hit the performance indicators that we would like to be hitting ourselves.”

However, Wexford upped it another notch since then, and they have hit their targets on every occasion, which has included some stunning form in front of goal.

Wexford have scored an impressive 15-59 on their way to the final this year but even though they have been lethal up front, Kent knows it’s just as important to be tight at the back.

Therefore, having the legendary figure of Mary Rose Kelly back in goal since the narrow win over Leitrim, has been a huge bonus.

“We had a couple of different sessions and she had been involved, stepping in goal for some of it and she had shown a little bit of form,” said Kent.

“It was something we chatted with her on and the opportunity arose with the way the series had panned out. The rest is history.

“She is a hugely experienced player that brings a wealth of knowledge and experience to it. She has worked hard since she has come in.

“It was great, another little bounce in relation to the collective. It really was.”

And although Aisling Murphy actually featured in goal during last year’s All-Ireland final, saving a penalty in the process, she has been the ace in the pack for Wexford at the opposite end of the field this year.

With her 8-10 so far in this campaign, Murphy is only behind Laois’ Mo Nerney in the race for the ZuCar Golden Boot.

“She has been hugely consistent and again she would be the first to say, she is at the end of the work that comes before,” said Kent.

“But Aisling has worked incredibly hard in relation to that off the field work, honing her craft and skill. I see it in training week in, week out. I’m delighted for Aisling that level of consistency and performance on the big day, others are getting to see what we see.

“It’s excellent and a credit to Aisling for the work that she has been doing on and off the park.”

All eyes will be on Croke Park for the meeting of Galway and Kerry in the All-Ireland SFC final tomorrow but seven days later Wexford will return for their date with destiny. And Kent expects a big support to follow her team into battle on the Jones’ Road.

“The Wexford people are great to support,” said Kent.

“We got a huge volume of support last year, our supporters are consistently at our games. There has been a great buzz of activity, any opportunity to head to Croke Park. We don’t get there too often.

“Yeah, there is a great buzz and great excitement. We would hope for a really good Wexford crowd on the day and a really entertaining game of football that they all enjoy.”

And despite playing a really good Laois team, Kent hopes this can be the final that her side get right to return to the senior ranks.

“Laois have been fantastic, a Division 2 side who held their own there this year, which is really a challenging division to be in,” said Kent.

“I think they are playing excellent football and they have consistently built as the year has gone on. A team I really enjoy watching but I hope I don’t enjoy watching them on the 31st too much.

“They have been a real pleasure to watch. I think it will be an exciting fast-flowing game. Two teams that love to play football, love to kick ball and hopefully it will make for an entertaining final.”