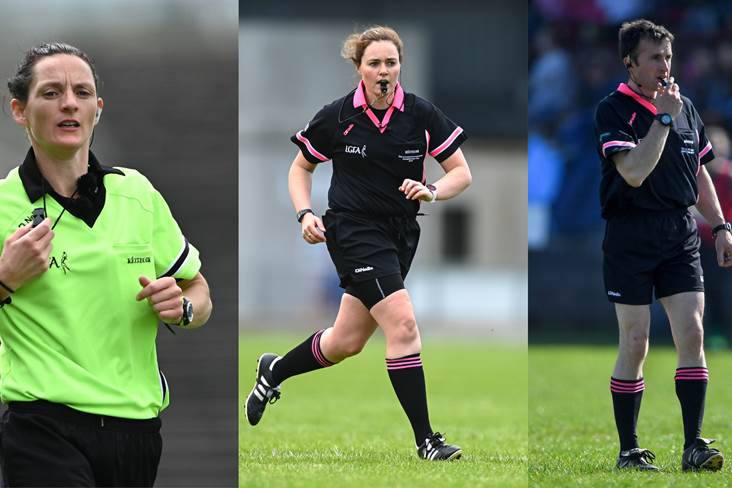 The Ladies Gaelic Football Association has announced the referees for the 2022 TG4 All-Ireland Junior, Intermediate and Senior championship finals, to be played at Croke Park on Sunday, July 31.

Cavan’s Maggie Farrelly will take charge of the eagerly-anticipated senior decider between Meath, the defending champions, and Kerry at 4pm.

Maggie was referee for the famous Cork-Dublin Final in 2014, when the Leesiders came from ten points down in the final quarter to claim victory.

Farrelly has already overseen some big games in 2022, including the Lidl National Division 1 clash between Meath and Dublin in Navan, the TG4 Ulster Senior Championship fixture between Armagh and Monaghan, and the TG4 All-Ireland Senior Championship round-robin fixture featuring Galway and Kerry.

Commenting on the news of her appointment, Farrelly said: “It’s a privilege to get the opportunity to referee the TG4 All-Ireland Senior Final – and an honour to be entrusted with this responsibility.

“I’m looking forward to the occasion and it’s an exciting final pairing with Meath, the current champions, up against Kerry, who will be appearing in a first Senior Final since 2012.

“It should be a great encounter and it will be lovely to be involved in it.”

This will be a first Croke Park All-Ireland Final refereeing assignment for Siobhán, as the 2020 Junior decider was played at Parnell Park.

Representing the Fanad Gaels club in county Donegal, Siobhán was referee for the 2022 TG4 Ulster Intermediate Final between Tyrone and Down, and also the TG4 All-Ireland Senior Championship round-robin fixture between Mayo and Cavan.

The TG4 All-Ireland Junior Final will be refereed by Kevin Corcoran, representing the Islandeady club in county Mayo.

This will also be a first TG4 All-Ireland Final at Croke Park for Kevin, who was referee for the 2017 Junior Final replay between Derry and Fermanagh in Clones.

Kevin was recently referee for the classic TG4 All-Ireland Intermediate semi-final between Laois and Clare, which went to extra-time before Laois eventually prevailed.

He was also the man in the middle for the 2022 TG4 Connacht Intermediate Final between Leitrim and Roscommon.

Tickets for the TG4 All Ireland finals are available to purchase through the LGFA Office and all GAA ticket outlets or phone: 01-8363156. Email: [email protected]

Booking Online: You can book online through our booking link: https://am.ticketmaster.com/gaa/lgfagames