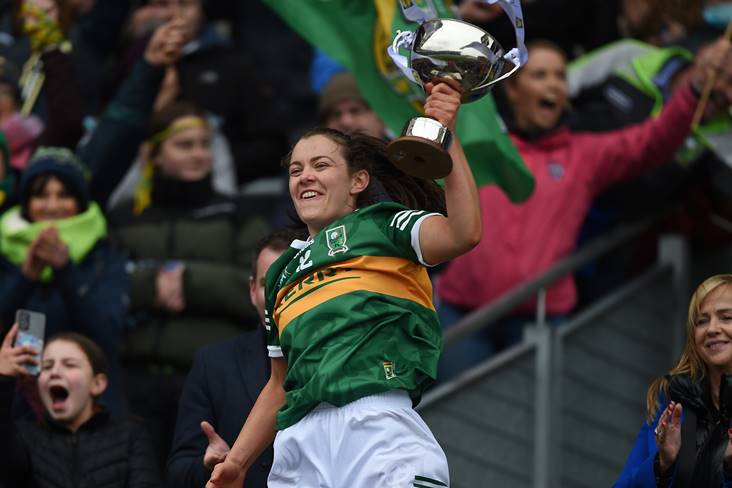 Kerry captain Anna Galvin spoke of her relief after overcoming Mayo and a TG4 All-Ireland Senior Championship semi-final to end a ten-year wait.

The Green and Gold jerseys will grace Croke Park again in two weeks after a stunning nine-point victory, their first appearance in the decider since 2012.

It was Kerry’s first time back in a senior semi-final in five years but they settled quicker to take a big 3-6 to 0-8 lead into half-time.

Mayo were looking to make amends for last year’s defeat to Dublin at this stage but goals from Aishling O’Connell and Síofra O’Shea (two) had them chasing from the early stages.

Paris McCarthy added a fourth Kerry goal in the second half and the Kingdom were cruising into the 31 July showpiece.

“We knew in the end that we have the legs. We’ve done serious work, we put the hard yards in and we had that in us,” said Galvin.

“Huge relief, we’re just thrilled. Myself and Lorraine Scanlon were walking back across the pitch there and we were like ‘it took us 10 years to get back there’. We’re delighted to be back there now.

“Just can’t wait to get back to the pitch again, training and preparing again during the week. Big relief.”

Shauna Howley opened the scoring but O’Connell got forward to loop her shot into the Kerry net in the sixth minute and that put Kerry into the ascendency.

Kerry had put four goals past a fancied Armagh outfit in the quarter-finals and they were on their way again, with O’Shea’s first goal arriving five minutes later.

The third Kerry goal gave them a 3-4 to 0-7 lead with nine minutes remaining in the first half and Mayo couldn’t claw them back after O’Shea’s second strike.

Mayo remained competitive on the resumption but the fourth goal was the killer blow, when McCarthy finished it off in the 44th minute.

“You can’t really plan for silly goals going in like that,” said Mayo manager Michael Moyles.

“I felt like every time they ran at us, they were going to score goals in the first half and it looked like that. We just looked at sixes and sevens. The energy that we showed last week just wasn’t there in the first half.